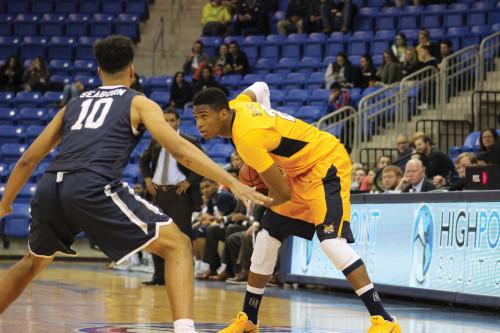 Recruiting in college basketball is usually a well-known, understood process. The coaches go out and scout high school talent, make scholarship offers to players they want to have on their team and the team comes together for the next season. 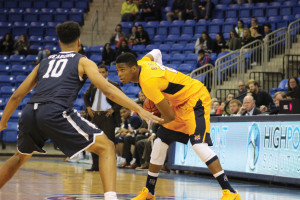 In more recent years, Division I men’s college basketball has been changing the process. While the coaches still do the traditional high school recruiting, a new way of getting players has quickly risen to popularity.

This year, the Quinnipiac men’s basketball team brought in four junior college transfers as opposed to just two freshmen. The Bobcats also lost one player, Giovanni McLean, due to transfer, as McLean signed a national letter of intent at Texas Tech for a graduate season in June. This came one year after now-seniors Daniel Harris and Donovan Smith came from the junior college ranks.

“Since we’ve joined the MAAC, I think we’ve been focusing more on the junior college players recently,” Quinnipiac head coach Tom Moore said. “In years when we feel like we need to get older and quicker and have an infusion of talent and experience at a key position, we might look more towards the junior college ranks because in general you are getting a guy who has played at a really high level and is closer to 20 years old than to 17 years old.”

The concept is that a player will go to a community college, play basketball for two years and hope to impress a Division I or Division II school enough to get a two-year scholarship offer. Harris believes that this route not only allows players to improve their game for two years and then play at the highest collegiate level, but it also allows them to come to a four-year school.

“There are so many benefits through transferring from junior college,” Harris said. “Coming from a community college to a four-year university gives you such a better education. Basketball-wise, it’s better competition, better coaching and a better lifestyle.”

Harris, who transferred from Hillsborough Community College in Plant City, Florida, is now in his second and final season as a Bobcat, has been a prime example of how the junior college transfer game can be effective for both the player and the team. He came in last year and averaged 10.2 points per game.

Despite this success, there was still an adjustment period because of the step up in competition.

“The intensity of the game stood out,” Harris said. “Some schools don’t take their basketball seriously in junior college, where the players don’t play as hard or they aren’t as disciplined on the court. When you come to this level, every night is a fight. Every play you have to play hard. It’s a lot more intense. There’s a lot more on the line.”

Another player who transferred from junior college was Phil Winston, who is in his first year at Quinnipiac. He started the first 11 games this season and is now a key bench player for the Bobcats. Winston also noted that there was a change in certain aspects of the game. 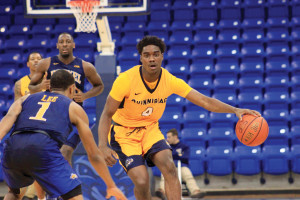 “It’s difficult in that there’s a quicker speed here,” Winston said. “I think there are similarities between junior college and DI, but it’s just a faster speed and better competition here. I think junior college really prepared me for this year, and the main reason I am where I am is because I have confidence from it.”

Winston emphasized how he gained confidence from playing at the collegiate level, even though it was junior college. He, along with Moore, believe junior college players are more ready to play right away.

“They are just physically stronger and more ready to come into the MAAC,” Moore said. “I think it’s worked out pretty well for us, but the drawback is you only get them for two years.”

The reason for so many transfers is likely due to the limited amount of playing time at this level. While Quinnipiac was fortunate to only lose one transfer last year, Moore estimated that the Bobcats lose an average of two players per year. Only five players can be on the court at a time, and that leaves eight other guys watching from the bench.

“Losing guys to transfer is never good for the continuity of the team,” Moore said. “I don’t think it’s a good look for the program. With only 13 scholarship athletes on the team, it’s going to happen. It seems like the transfer list grows every year. Most coaches can only keep about nine guys happy, meaning four young men will come to the gym every night knowing that unless there’s an injury or blowout, they aren’t playing.”

That is all part of the job for coaches. If players feel they will get an opportunity to get more playing time somewhere else, they may hesitate to move on from the school.

“If they aren’t seniors, they’re in your office at the end of the season asking if they’re going to play next year,” Moore said. “They deserve the answers, too, for their futures. You have to have conversations with kids after every season so they know where they stand. Obviously, they don’t want to waste their years on the bench.”

For junior college transfers, it is a constant battle for playing time because they only have two years to make their impact. The players usually improve over their two years, but it is tough with such little time.

“There’s certain intricacies of our team defenses and offenses that make it difficult, and it’s something new that takes time to adjust to,” Moore said. “The second year is when I catch myself wishing I had a third and fourth year with these guys.”

For Harris, he finds that while he has adjusted his game to fit in and thrive at the Division I level, he is now reaching beyond the game.

“I know this year, even though I’ve only played one year, I’m a senior so I have to show the ropes to the freshmen who have came in because I have played four years of college,” Harris said. “That’s been the bigger adjustment, not just coming here, but being a leader and showing team discipline to the freshman so they will be able to learn for their four years.”

But while the landscape of college basketball appears to be heading towards more targeting of transfers, Quinnipiac has freshmen Mikey Dixon and Peter Kiss leading the way in scoring.

Moore believes that it is important to find the balance between targeting high school talent and looking for transfers.

“The junior college recruiting is a lot harder financially and logistically,” Moore said. “We prefer to be traditional with high schoolers because I believe that’s how you win in this league long-term.”