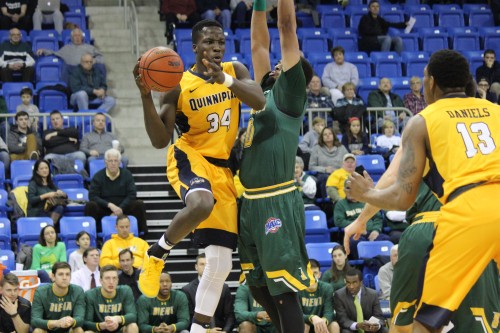 Even though Monday night’s game between the Quinnipiac men’s basketball team and the Siena Saints was competitive throughout,the Saints would out-rebound the Bobcats 51-26, with 22 offensive rebounds, in their 84-75 win at Lender Court in Hamden. 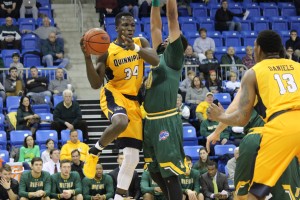 “It shouldn’t have been that much,” Bobcats head coach Tom Moore said on the difference in rebounds.

The game shifted four minutes in when senior forward Donovan Smith, the Bobcats’ second-leading rebounder, left the game with an undisclosed injury.

The Bobcats (8-14, 5-7 MAAC) felt Smith’s absence with 5:04 left in the game when junior forward Chase Daniels left the game after he got his fourth foul, with the Bobcats trailing 67-61. Siena’s Lavon Long proceeded to make one of two free throws. Javion Ogunyemi hit a three-pointer and extended the Saints lead to 12 on the next possession.

After Quinnipiac freshman guard Mikey Dixon hit a pair of free throws, the Saints scored six straight points to give them a 79-63 lead with 1:22 left, finishing the Bobcats for good.

Long and Ogunyemi led all scorers with 26 and 25 points, respectively. Long also led all players in rebounds with 16 while his teammate, forward Brett Bisping, had 14 rebounds. 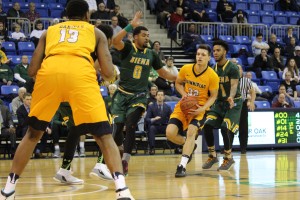 Dixon, along with fellow freshman guard Peter Kiss, led the Bobcats with 19 points.

“[Dixon and Kiss] looked poised offensively tonight,” Moore said. “Mikey’s always been efficient and Pete’s doing a really good job of trying to understand turnovers and forced shots. He’s growing every single day when it comes to that stuff.

Daniels also had an impressive performance with 18 points, nine rebounds and seven blocks.

Moore noted how crucial Daniels is to the team, especially with Smith’s early exit.

“He’s very important,” Moore said of Daniels. “He’s a passionate kid. he plays hard, competes hard. He’s done a really better job this year as a junior… he’s getting more comfortable in being a guy who can score too.” 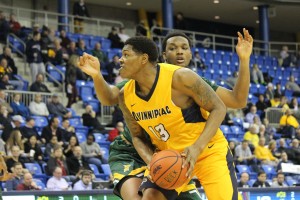 Even though the Bobcats trailed for the entire second half, they led for much of the first half.

Moore did not know the severity of Smith’s injury after the game.

The Bobcats will host the Niagara Purple Hawks Saturday night at Lender Court before traveling to Fairfield next Monday.