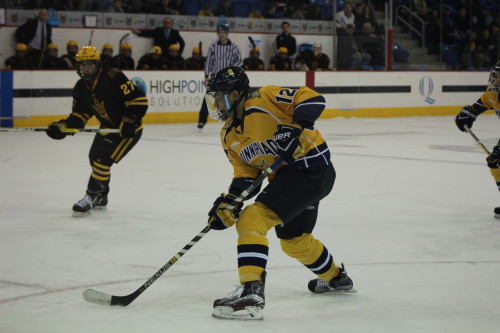 On Saturday night, the two-year-old Division-I program downed No. 17 Quinnipiac (14-11-2 overall) by a score 4-2, splitting the weekend series and boosting its overall record to 10-18-2. 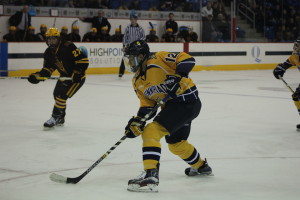 After beating the Sun Devils the night before, the Bobcats had a much more difficult time finding results in the second night of a back-to-back.

“It was a frustrating night. I won’t take anything away from Arizona State, but we struggled,” Pecknold said. “We’ve shown in spurts that we can be really good, usually the first day of the weekend, then the second night it’s a struggle mentally.”

The Sun Devils opened the scoring 14:25 into the first period on a goal from sophomore Anthony Croston, who capitalized on a one-timer as a result of a defensive miscue from defenseman Joe Fiala in Quinnipiac’s own zone.

At the end of the first period, Quinnipiac outshot Arizona State 11-8, but went into the locker room down 2-0.

Looking to rebound on the scoreboard, the Bobcats started the second period off by allowing a goal against 22 seconds in. 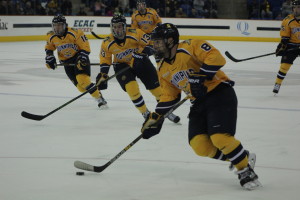 Freshman defenseman Karlis Cukste mishandled the puck behind Quinnipiac’s net, turned the puck over and inadvertently deflected a Sun Devil shot into the net. With the score 3-0, Pecknold decided to pull Shortridge (6 saves on 9 shots) and replace him with Chris Truehl.

Later in the period, Quinnipiac’s Tim Clifton scored on the power play for his 11th of the season… or so he thought. A Craig Martin pass intended for Clifton was kicked into the net and ruled a goal on the ice, however, after further review on the play it was determined that Clifton’s kick was intentional, thus the goal was disallowed.

On the ensuing shift and exactly 14 minutes after ASU made it 3-0, Tim Clifton found the back of the net for his 11th of the season.

This time it counted.

While it seemed as though Quinnipiac had momentum in its favor, the next goal took the wind out of High Point Solutions Arena. A point shot from sophomore Jakob Stridsberg found a hole past goalie in relief Chris Truehl to make it 4-1 for ASU at the end of the period.

The next goal was scored just under six minutes into the third period of play. Connor Clifton netted his fourth goal of the season from the blue line to give the Bobcats a fighting chance.

Unfortunately for the Bobcats, they ran into a red hot goalie in Joey Daccord.

“Joey Daccord, who I’ve known since he was 2-years-old, played great and made a lot of good saves,” Pecknold said. “I thought he was great tonight.”

Quinnipiac threw 28 of its 55 total shots on goal in the third, but Daccord stood tall and shut the door. Despite outshooting ASU 28-1 in the third period, on the shoulders of Daccord, the Sun Devils emerged victorious. 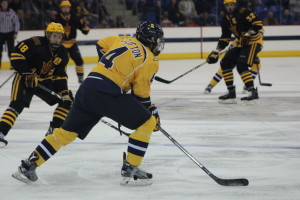 Before winning against No. 17 Quinnipiac, the highest ranked opponent Arizona State beat was No. 18 Air Force earlier this season.

“They’re a new program, but they’re a good hockey team and proved it tonight” Clifton said. “They played better than us, outplayed us for two periods and ultimately that was the game.”

Next up, Quinnipiac will go on the road to face Brown at the Meehan Auditorium on Feb. 3 in hopes of getting back on track in conference play.