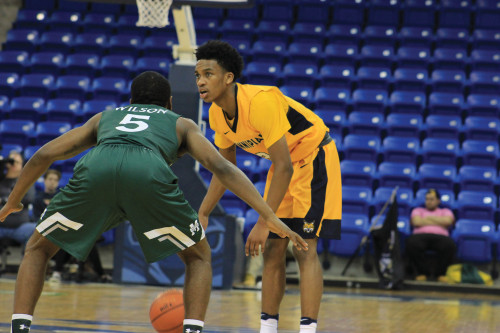 The future continues to look bright for the men’s basketball program as the team went an even 5-5 during the winter break. 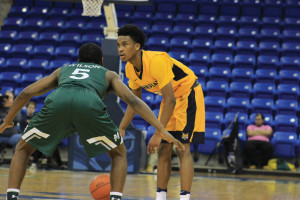 Freshman guard Mikey Dixon has taken over as the leading scorer on the team, putting up over 20 points in six of the games during the recession. Dixon recently broke the Quinnipiac Division I record he shared for most points in a game by a freshman with 29 points in the 95-90 win over Canisius on Jan. 20. Dixon ranks eighth nationally in scoring averages for freshmen.

The other freshman on the roster, guard Peter Kiss, has also stepped up for the Bobcats. Kiss and Dixon were inserted into the starting lineup on Dec. 29 in a 66-61 defeat to Brown. Since that loss, Quinnipiac has gone 4-3. Dixon is now leading the team with 16.6 points per game, while Kiss is second on the team with 12.3 per game.

“[Mikey] has grown up quite a bit, and I like that he’s learned just how hard you have to play at both ends of the court,” head coach Tom Moore said following the loss at Brown. “I knew he was good offensively, but he’s a much improved defender. He’s really fun to coach right now.”

The Bobcats remained inconsistent over the break, much like they have been all season. It began with a solid 85-75 win at Maine on Dec. 18. They followed that up with a home loss against Drexel and the road loss at Brown.

Their stretch of MAAC play began on Jan. 2 with an 81-78 win at Niagara, then a loss at Canisius and a win at home against Manhattan. 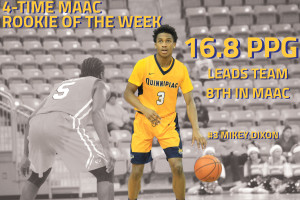 As the Bobcats dove deeper into conference play, they went on to lose two straight on the road against Saint Peter’s and Siena on Jan. 9 and 12, respectively. In the final two games of the break, Quinnipiac finished strong with wins over both Iona and Canisius on Jan. 14 and 20, respectively.

The Bobcats have made a name for themselves this season as they are 5-5 in MAAC play. Quinnipiac is currently tied for third place in the conference standings with Canisius, Iona, and Siena. This comes after Quinnipiac was picked to finish 10th in the 11-team conference.

Quinnipiac faced Iona, the defending MAAC champion, in New Rochelle, New York on Monday night. The Gaels jumped out to a seven-point halftime lead and kept their distance throughout the second half as they won, 84-74. Dixon and Kiss were the leading scorers for the Bobcats with 20 and 16 points, respectively.

The Bobcats sit at 8-12 overall and will travel to face Monmouth, the preseason MAAC favorite, on Friday.