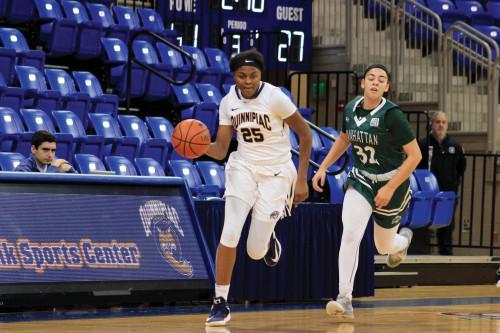 While the students of Quinnipiac were away on winter break, the women’s basketball team (16-4, 9-1 MAAC) was surging through its conference schedule and nearing the apex of the Mid-Major rankings. 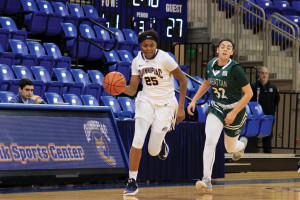 Prior to conference play, the Bobcats participated in the Play 4K Shootout in Las Vegas, placing third by winning two out of three contests in the desert. Senior Adily Martucci led the way for the Bobcats, averaging 16 points per game and taking home All-Tournament honors.

The Bobcats’ only loss in the tournament came at the hands of Oregon State, which is currently ranked 11th in the AP Top 25 rankings. Quinnipiac battled the Beavers into the fourth quarter, trailing by just six before Oregon State flexed its muscles and pulled away late. Despite the loss, it served as a valuable tune-up heading into conference play.

The Bobcats rattled off six straight conference wins after the Play 4K Shootout before hitting a wall last Thursday at Monmouth. In what can only be described as an anomaly, the Bobcats shot just 25 percent from the field and somehow still found themselves with a chance to win in the game’s final minute. They eventually suffered the upset by a score of 61-58 for their first conference loss of the season.

The Bobcats rebounded from their shocking defeat by steamrolling Rider University, 79-53, on Saturday. Rider, currently second in the MAAC standings, had no answer for the Bobcats’ offensive attack.

“[Our players] had the right answer,” Fabbri said after the blowout victory. “They’re champions, they know what it takes, and they just came out with a great performance, a complete game, and a great team victory.”

The key to the Bobcats’ success has been their depth. Even though the Bobcats only have one player in the top three of any statistical category in the MAAC (Jen Fay ranks third in free throw percentage), they lead the league in scoring (70.1 PPG) and have the best scoring defense (58.0 PPG). Fay, Martucci, Paula Strautmane, and Aryn McClure are all averaging seven or more points per game.

The Bobcats play next on Friday when they host the Niagara Purple Eagles (3-16, 2-8 MAAC), who are tied for last place in the conference, before traveling to Iona and Fairfield next week.