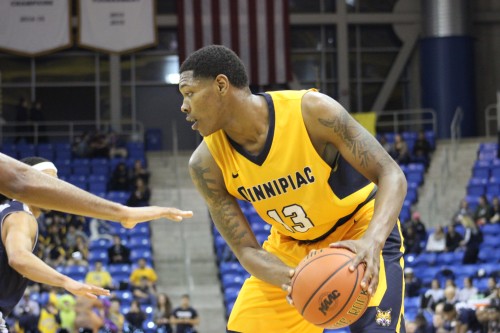 The Quinnipiac men’s basketball team traveled to Providence, Rhode Island in a non-conference matchup against Brown University on Thursday night. Despite a second straight 20-point performance by freshman Mikey Dixon, the Bobcats ultimately fell to the Bears, 66-61.

The Bobcats came out playing tenacious defense, however, they struggled to score, starting the game shooting 0-5 from the floor. Junior Chaise Daniels wore a brace after re-aggravating a chip fracture in his hand last game. Although Daniels played a majority of the contest, senior Donovan Smith took over the scoring load.

Smith hit a three to tie the game back up at 8, however, the Bears responded with another three within minutes.

Quinnipiac went on a 7-0 run early on and would make it a more tightly contested game throughout the first half.

“We played with much more poise and kept believing,” Quinnipiac head coach Tom Moore said. “The energy we played with on defense carried over to our offense. It was the first time this year with this group that we fed off our defensive energy and it stabilized our offensive in the second half.”

The Bobcats took their last lead at 20-19 with just over six minutes remaining in the first half and could not stop Brown guard JR Hobbie, who went 3-3 from beyond the perimeter late in half.

Brown went on an 8-0 run to close out the final minutes of the first half and quietly snuck away with a 12-point lead at the break. Hobbie and Brown big-man Travis Fuller each lead the way with 11 points apiece in the first half as Brown held a 37-25 lead.

Freshman Mikey Dixon led all scorers with 12 points and shot 50 percent from the floor.

“He’s really growing up quickly and we’ve put him in a lot of spots already,” Moore said. “He’s getting better every practice and every game. Coach (Jim) Calhoun used to talk about young guys in their careers and the first time they get 20 points; it’s a magical figure. [Mikey] has grown up quite a bit and I like that he’s learned just how hard you have to play at both ends of the court. I knew he was good offensively, but he’s a much improved defender. He’s really fun to coach right now.”

As a result of shooting 23-30 (76 percent) from the free throw line, Brown held a double-digit lead for most of the second half. Quinnipiac continued to fight back, closing the lead back down to single digits. Sophomore Andrew Robinson hit a pair of free throws and a three pointer in the closing minutes to cut the lead down to four, however, it would not be enough as the Bears would escape with a 66-61 win.

With Thursday night’s loss, the Bobcats fall to a 4-8 overall record this season. The team will resume its conference play and have a chance to get its second MAAC win as it travels to Buffalo, New York to play Niagara on Monday at 7 p.m.