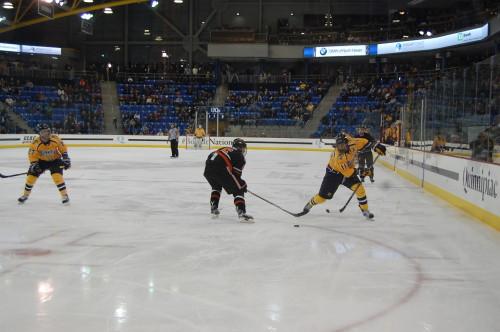 In its last three games alone, No. 7/8 Quinnipiac men’s ice hockey has lost just one fewer than it did all of last season. 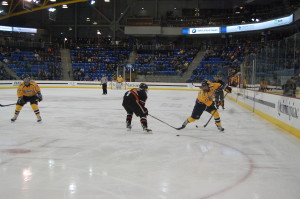 The Bobcats lost 4-1 to Princeton at High Point Solutions Arena in the second game of a home-and-home series on Saturday.

Sophomore forward Max Veronneau led the way for the Tigers with two goals, while Kevin Duane scored the lone goal for the Bobcats.

Princeton’s weekend sweep over Quinnipiac is the first time it has done so since 2008-09.

“This was bad,” head coach Rand Pecknold said of the weekend sweep. “It’s disappointing to lose games. I think I’m more disappointed in how we lost them. I just don’t think it was typical Quinnipiac identity at all.”

The atypical play began early on when Veronneau slid a harmless-looking puck from below the goal line under Quinnipiac goaltender Chris Truehl just 3:20 into the first period. The obscure goal was Veronneau’s fifth of the season.

Princeton capitalized for the second time of the night after Tim Clifton was called for charging with just under five minutes to play in the period. This time Ryan Kuffner found twine on the power play to extend the Tigers’ lead to 2-0.

Aside from an Alex Whelan shot that hit the crossbar and a few big hits delivered by Tim and Connor Clifton, the Bobcats didn’t generate much of anything in the first period. 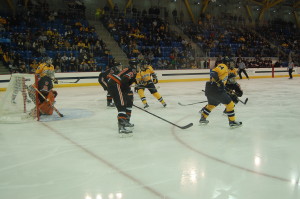 Pecknold knew he had to wake his team up in the next frame, so he pulled Truehl and went with freshman Andrew Shortridge between the pipes in the second period.

“I switched goalies today for the second and third more to give our team a shot in the arm,” Pecknold said. “It worked at first, but we just couldn’t find a way to score goals tonight.”

Quinnipiac’s single goal came off of Kevin Duane’s stick just 24 seconds after the change of goalies. Duane found himself on a breakaway, made a nice move to freeze Princeton goalie Colton Phinney and made no mistake burying a shot top shelf to cut the Tigers’ lead in half.

After an injury-riddled start of the season, Duane’s goal was his third in as many games.

“[I’ve had] a little bit of luck, being at the right place at the right time,” Duane said. “Just getting more comfortable playing again after taking the year off, things feel like they’re starting to come together, I guess.”

Despite Quinnipiac’s 15 second-period shots on goal, Duane was the only Bobcat that could solve Phinney, who made a total of 33 saves on 34 shots.

Hoping to get back into the game in the third period, Quinnipiac did not start the way it would have liked to.

Just 2:02 into the third, Princeton junior forward Max Becker made it a 3-1 game. Becker’s second goal of the season came off of a giveaway from a defensive zone behind the net.

“We just had a lot of issues, you know, fumbling the puck and whether it was five-on-five or the power play we had, again, a lot of guys that weren’t very good tonight,” Pecknold said. “I give Princeton credit, they played well and deserved to win.” 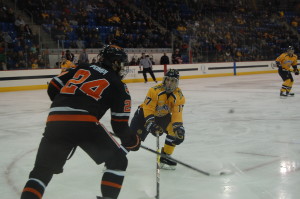 With just under two minutes left to play in the third period, Veronneau scored in an empty net to ensure the win for his team.

The Bobcats will have to wait before their chance at redemption in conference play, as they travel to Pittsburgh, Pennsylvania to take part in the Three Rivers Classic at the Pittsburgh Penguins’ PPG Paints Arena. There they will take on Boston College in a Frozen Four Semifinals rematch and the either Ferris State or Robert Morris, depending on the outcome of that game.

Pecknold hopes that this weekend served as a wakeup call for his team and wants the season to turn around shortly.

“We definitely have some talent here, so we’ll reload,” Pecknold said. “You know, final exams on Monday, we’ll reload and once we get back after it after Christmas [we’ll] try to move forward.”