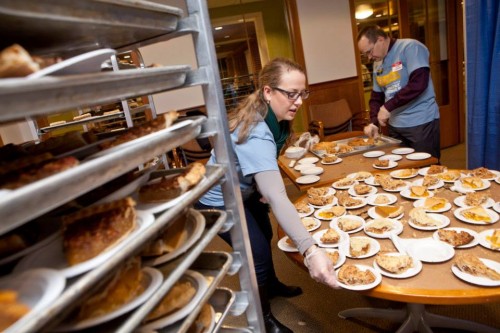 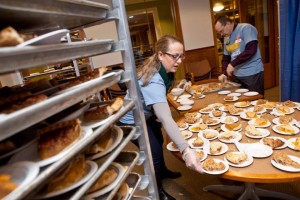 On Thursday Dec. 8 the Carl Hansen Student Center Dining Hall will be converted to resemble Hogwarts Great Hall to create a family-like atmosphere for Quinnipiac’s 32nd annual Holiday Dinner. The Holiday Dinner works to bring every aspect of the university’s community together to feast and celebrate the holiday season together before final exams.

The dinner started at Quinnipiac 32 years ago when Legal Studies Professor Jill Martin and co-workers introduced the idea to the university. Martin is the chair of the Holiday Dinner Committee and chair of the legal studies department at Quinnipiac.

Quinnipiac was a much different place in 1984, according to Martin.

“We had about 1,500 undergraduates,” Martin said. “I myself had gone to a very small women’s college. That college had two different dinners, one Italian dinner where the faculty served the students and then another one a very big holiday dinner before we left for the end of the semester.”

There weren’t many traditions at Quinnipiac back then, according to Martin. Along with co-workers Martin worked to bring the Holiday Dinner to life at Quinnipiac.

When the dinner first began, the committee tried different meals before deciding on the dinner that is now served, according to Martin.

“Chartwells really does an excellent job, and we want to thank all of those people at Chartwells who work on it,” Martin said.

The dinner has evolved over the years to make the event enjoyable for the Quinnipiac community as a whole.

“We had a couple of years where we actually had a hayride,” Martin said. “It was a tractor pulling a wagon filled with hay and it went up and down Bobcat Way and picked up students and brought them down.”

There were times when the university had different traditions such as students being able to take pictures with Santa Claus  and watch holiday themed movies, according to Martin.

“I am planning on attending with members from my a capella group, the Quinnipiac Legends,” Alderete said. “A lot of my friends have gone in the past and said the food is really good. It’s also really cool to see the faculty and professors all coming together.”

Students who come should feel that they are valued members of the community, according to Martin.

“It is kind of like feeding students like their moms would before they have to go off and do their exam,” Martin said.

Alderete is looking forward to the dinner and the good food that will be served.

“I haven’t been able to go in the past because I was stressed with finals but this year I decided to give myself a study break,” Alderete said. “It will be a nice break to spend time with my friends.”