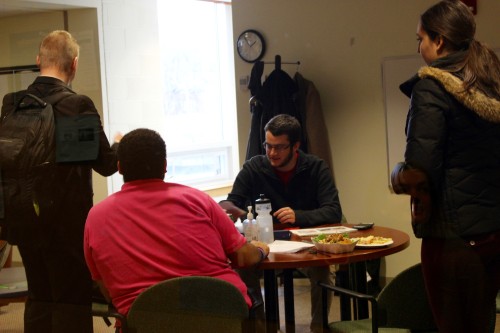 Members of SGA work all year on initiatives to improve student life on campus.

The fall semester of 2016 is coming to a close, and the class presidents of the university have plans in mind for the future during the spring semester of 2017.

“Every member [of the senior cabinet] is working on initiatives, and we work incredibly well as a team,” Pereira said. “Every member understands that they have been elected into this position to embody the Quinnipiac student body and to make sure students are represented and heard.”

Pereira said she hopes to continue the progress that the cabinet and her have already started by planning events for the senior class to enjoy their last year, as well as have a three part seminar series that focuses on preparing Seniors for post-graduation life and the working world.

“The senior cabinet is looking into the day visitor policy, all gender housing options, and holiday spirit on all three campuses,” she said. “We also had a successful pre-game reception for the Senior class prior to Saturday Dec. 3 men’s hockey game of which we hope to hold again in the Spring for another sports team.”

Junior class president and journalism major Tatyana Youssef said that since her election, she has focused her work mostly on York Hill. By focusing on York Hill, the junior cabinet initiatives get done one by one, leading to better efficiency, completion and productivity, according to Youssef.

“I’m so proud of the cabinet for adding a Chobani yogurt station at York, which will be here after break, and adding “to-go” foods, all ideas we received as data from surveys we release at biweekly meet-and-greets where we offer food and drinks at the shuttle stop in return for the student’s concerns and survey answers,” she said. “This process of how we go about initiatives is something I’m most definitely proud of.”

When it comes to plans for next semester, Youssef said that she hopes to continue focusing on improving York Hill. Youssef and her cabinet will also try to create more study and recreational spaces at the Rocky Top Student Center.

Sophomore class president and physical therapy major Ryan Hicks said he is proud of the way the sophomore cabinet works together. “We wasted no time getting down to business, and that shows with the progress we have made on our initiatives,” Hicks said.

Hicks plans on continuing to hear the concerns of his designated class for next semester.

“Our job is to make sure we are always aware of what problems students face and constantly trying to improve every students’ experience at Quinnipiac,” Hicks said.

Freshman class president and 3+1 marketing major Christopher Montalvo focused on trying to change the smoking policy on campus this semester, in attempts to prohibit smoking on both the Mount Carmel and York Hill campuses.

There was a student poll posted on Facebook in the official Quinnipiac Student Government Association page on Nov. 7. It presented the results of a poll on how many students would be content with having both campuses smoking-free. A total of 64 percent of students said yes to the idea, whereas 36 percent disagreed with it.

The fight to change the smoking policy will still be pursued next semester.

“[The new smoking policy] is not fully complete yet. The proposal’s done, it’s just now we’re trying to get it implemented,” Montalvo said.

Montalvo also plans on evaluating QCards to make sure they are being fully used around Whitney Avenue, expanding their usage in nearby locations.

Montalvo also wishes for people to reach out to his cabinet and the student government in order to hear more ideas on how they can help improve the university.