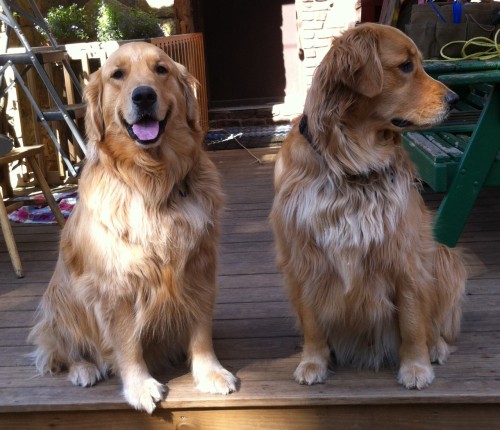 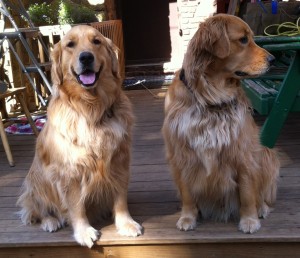 Finals week brings not only exams, projects and essays to students, but also two golden retrievers who make the week all the more bearable.

At the end of each semester during finals week, psychology professor Sharlene Walbaum hosts Dog Finals, an event where she brings her two dogs, Ben and Tucker, to campus in order for students to take a study break and relieve some of their stress.

Dog Finals began in 2013 after Walbaum noticed the attention her dogs received when she brought them to campus.

“I used to bring them to campus briefly when I needed to get something from my office, and what I found out was I couldn’t get from my car to my office because people would stop me and ask to pet my dogs, and they would be very happy to see [the dogs],” she said. “I never realized that my dogs would have that impact on people. They seemed to really draw people in and make people feel really happy, and it dawned on me that it would be great to have them around during finals week.”

When Ben and Tucker were six months old, Walbaum decided to bring them to campus for finals week. She reserved a room in the College of Arts and Sciences and allowed members of the community to come spend time with her dogs.

Walbaum noticed that many students, faculty and staff stopped by throughout the day.

“I thought well, students and professors who came by were so happy and relaxed, so I turned it into a tradition,” she said.

Now in its fourth full year, Dog Finals is a co-sponsored event hosted by the Psychology Honors Society (Psi Chi), the Psychology Club and the Behavioral Neuroscience Club. Walbaum usually asks her students to volunteer for time slots each day during finals week to watch the dogs and calls her volunteers “dog profs.”

During Dog Finals, there are three dog profs with the dogs at all times. One dog prof stays in the room with one of the dogs, while another dog prof takes another dog out for a walk around campus. The third dog prof is a backup in case extra help is needed.

Class of 2016 graduate Rebecca Carlone is one of the dog profs who helps Walbaum with the event and said the dogs have established themselves on campus.

“They unconditionally love everyone who walks into that room, and they have such an instinct to come up to people and know that they are going through a rough time,” she said.

Carlone said one of the most important parts of the event is the way it effects the body.

“When you pet the dog, you are releasing oxytocin in your brain, and [the dogs are] releasing that same chemical as well, so it’s funny how it is a mutually beneficial relationship between the dog and student,” Carlone said.

Oxytocin is considered a love hormone, according to Walbaum. 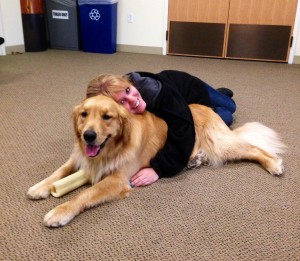 “The release of oxytocin is why people get that warm and loving feeling when looking at the dogs and spending time with them,” Walbum said.

Walbaum said she loves how students react when they come into the room and see her dogs.

“It’s funny to be in a room with ten or so people sitting in a circle with a dog in the middle,” she said. “It says something on how much of an impact it has because everyone is calm together and everyone is relaxed together.”

Carlone said one of her favorite parts of participating in Dog Finals is the reactions students have when they see Ben and Tucker.

“When you’re walking around with [the dogs] or even when students walk in the room, they just walk in the room and cry because it is such a release of emotion,” Carlone said. “It is really great to see. It is nice that dogs are the common denominator between a lot of us, and they just bring everyone together, and people are chatting in a room with people they wouldn’t normally be with.”

Walbaum said Dog Finals is a great stress reliever for students because it reminds them of their animals at home.

“Students will often talk about the animals they have at home that they love and they always say, ‘I wish my dog was here’ and ‘I miss my dog so much,’” she said. “These dogs are standing in for the dogs they are familiar with, so students are vicariously loving their dog and petting their dog while still at school.”

Walbaum hopes that someone takes over Dog Finals after she retires in three and a half years, but she is nervous the university will not be receptive to the idea. 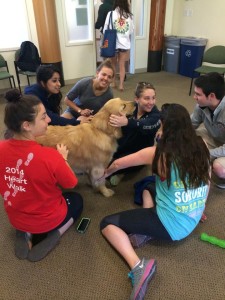 In 2014, the university put a ban on professors bringing their dogs into the classroom. In order to clear the event with administration, Walbaum had to get insurance to cover her dogs in case something went wrong during the event, and she had to certify her dogs as Canine Good Citizens since they are not therapy dogs.

“It doesn’t seem like [the university] is really open to doing what I think would be fantastic and have a bigger program with more dogs in more places across campus,” she said. “What I’m hoping is someone will take some initiative and some energy and say, ‘This is cool enough that I want to be a part of it.’”

This year, Dog Finals will take place in the Carl Hansen Student Center room SC119 Dec. 12-15 from 8 a.m.–2 p.m. Ben and Tucker will also be taking turns walking around campus on a leash for students who don’t have time to make it to the room.

Carlone encourages students to stop by during the week to relieve some of their stress.

“Even if you don’t think you have time to do it, just those ten minutes with the dogs are so important,” she said. “They’re amazing dogs, and we are very lucky that we have Professor Walbaum to bring them in.”