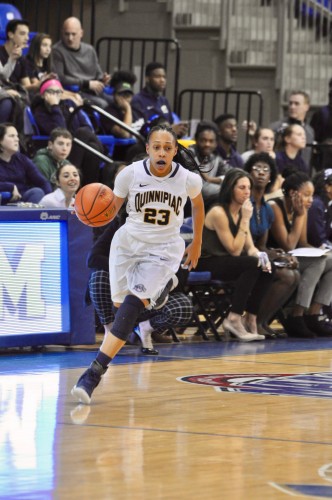 The Quinnipiac women’s basketball team (6-2) failed to recover from an 18-0 run from the Michigan State Spartans (8-2) to lose 71-54 at home on Tuesday night.

The Spartans’ run started with 4:02 left in the first quarter when Jenna Allen got a layup to put them up 9-6. Branndais Agee, Taya Reimer and Nia Hollie would each score on layups after before shooting guard Tori Jankoska hit a deep 3-pointer in the closing seconds of the quarter to put the Spartans up 18-6.

“I would like to have some of the beginning of that game back offensively,” Bobcats head coach Tricia Fabbri said.

The run would continue into the second quarter with Jankoska and Hollie scoring again along with a pair of Spartans making free-throws to make it 25-6. The Bobcats ended the run with 5:13 remaining in the half when junior guard Brittany Johnson hit one of two free throws. The Bobcats got their first field goal in 11 minutes when redshirt sophomore forward Jen Fay hit a layup.

“Not shooting the ball compounded our offensive woes,” Fabbri said. “It was really a perfect storm for us offensively. Putting the ball into the basket and not being able to go bucket-for-bucket was a real struggle for us.”

Michigan State went into the locker room with a 30-14 halftime lead. The Bobcats struggled getting by the Spartans’ full-court trap, committing 11 turnovers and shooting 18.5 percent (5-27) from the field in the half. They also only shot 50 percent (6-12) from the free throw line in the first three quarters.

“We just could not find a rhythm offensively,” Fabbri said. “It’s a bad night to pick a bad shooting night against a really big, strong, athletic team to try to fish out offensive rebounds.

The Bobcats would outscore the Spartans 18-15 in the third quarter, making the Michigan State lead 45-32 heading into the final quarter.

The Bobcats went on small scoring bursts in the fourth quarter with senior guard Adily Martucci scoring 12 points and sophomore swingman Aryn McClure adding 4 points in the 22-point quarter. But the Bobcats would never get within 10 points of the Spartans.

“We just really settled in and took care of the ball,” Fabbri said. “It wasn’t really anything major, it was just settle down and be more poised with it and handling their zone press. Which we did in the second-half.”

Martucci led all scorers with 20 points in 23 minutes off the bench. She also had the job to defend the Big Ten’s second leading scorer, Jankoska (23.4 points per game), who shot 30.8 percent (4-13) from the field.

“We wanted to make sure [Jankoska] wasn’t getting the points she usually gets every game,” Martucci said.

“It’s so impressive because she didn’t practice because she was sick,” Fabbri said of Martucci. “It’s her experience that you lean on as a coach coming through the program after all these years is second-to-none.

McClure finished with 12 points and was one of three Bobcats with 5 rebounds along with Fay and freshman swingman Vanessa Udoji.

Martucci’s co-captain, senior forward Morgan Manz, made two 3-pointers and finished the night with 8 points off the bench.

“We were really excited when we found out we were going to play [Michigan State],” Manz said. “We took this as a great opportunity. We knew they were going to be good. We scouted them, we did everything good. We obviously came up short, but we can take this game and learn from it. It was a really great experience and [will] prepare us for future games.”

Both captains saw the Spartans, who have been ranked as high as No. 19 in this year’s Coaches Poll, as another game.

“To me, it doesn’t matter what the hell your name is to be honest,” Martucci said. “It’s a game. We’re here to win.”

Fabbri enjoyed having the Michigan State, who they will play again next year, on the schedule and hopes to bring more top teams into Hamden.

“It was exciting, it was great waking up today,” Fabbri said. “It was a fun day, fun shoot [around]. We had a little hop on the step and it was nice to go around and get to the cafeteria to talk the game up to get a nice crowd. We’re even more committed to getting games like this on the schedule.”

The Bobcats play next on Saturday afternoon at Hartford University to face the Hawks, who are off to a 7-2 start with a new coaching staff. The Bobcats will then go to Las Vegas for the Play 4Kay Shootout tournament a week later.