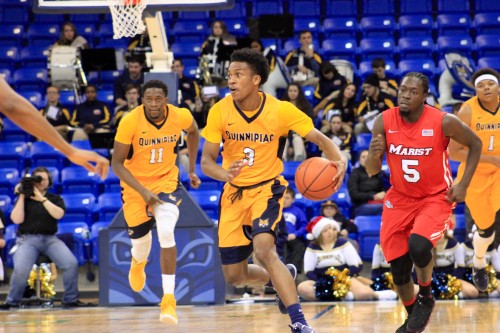 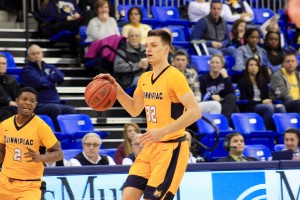 Following a 91-72 loss to Monmouth on Thursday night, the Bobcats came out rolling against the Red Foxes, starting the game on a 7-0 run. Quinnipiac proved itself as a national powerhouse in rebounding as it dominated the boards early with a 14-7 edge over Marist.

While the big men made their presence known in the paint, senior guard Daniel Harris stepped up on the defensive side of the ball. Although Harris did not score for the Bobcats in the first half, he played a key role in slowing down one of the top leading scorers in the MAAC in Marist’s Khallid Hart. Quinnipiac senior forward Alain Chigha was quick to commend his teammates for sticking together through adversity. 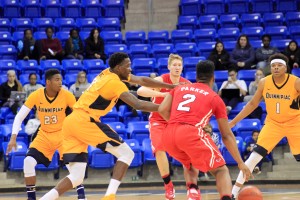 “Today we had to do it as a team,” Chigha said. “You can’t come into the game and try to stop Khallid [Hart] all by yourself. You have to rely on the man to your right and left to be there.”

The Bobcats would take a commanding 42-25 lead at the break thanks to a 20-4 run late in the first half. Kiss, who was recently named the MAAC Men’s Basketball Rookie of the Week, exploded in the first half, scoring 9 points and grabbing 7 rebounds.

Kiss made a name for himself by averaging 16 points a game at the AdvoCare International tournament in Orlando, Florida in late November. Kiss, who finished the game with 13 points and 9 rebounds, joined senior forward Donovan Smith and Dixon to combine for 35 of 40 bench points for the Bobcats.

Quinnipiac shot over 50 percent from the floor in the first half. Head coach Tom Moore stressed that while the Bobcats were in a comfortable position at the half, they could not ease any of the defensive pressure on Marist. 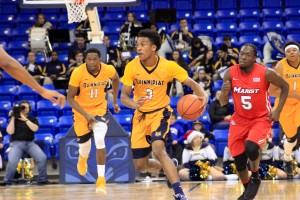 The Bobcats had a slow start to the second half and allowed the Red Foxes to cut the lead to within five points. Marist came out of the break with hot hands as Marist’s Ryan Funk hit back-to-back threes and went on to score 17 of his game-high 23 points in the second half.

Dixon put an end to the Marist scoring run as he scored six straight points in the closing minutes of the contest. The freshman was pleased by his team’s performance and ability to maintain a double-digit lead.

“As a team, I feel like we made a big step together,” Dixon said. “We did get hit with adversity once or twice in the game, and sometimes you have tendencies to welter and break away, but I feel like we stuck together and were able to make a push early.” 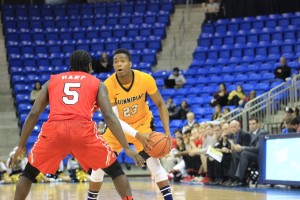 Junior forward Chaise Daniels led the Bobcats offense with 17 points, going 6 of 11 from the field and 5 of 6 from the free throw line. Moore gave Daniels and Smith credit for playing smart basketball in crucial moments of the game against two elite Marist players.

“I thought a huge key was Chaise [Daniels] and Donovan [Smith] playing Hart and [Khalid] Parker as a second defender,” Moore said. “You could tell visually in front of our bench in the first half that every time one of those guys got the ball and was looking to go, not only was there a guy in front of him, but there was also a big yellow jersey right there at the rim. Everything was congested and I thought we did a great job of that in the first half, and that’s a tribute to Chaise and Donovan’s attention in the last two days and locking in on the scouting report.”

The Quinnipiac men’s basketball team will look for its third win of the season as it hosts the University of Hartford in a non-conference matchup on Wednesday at 7 p.m.