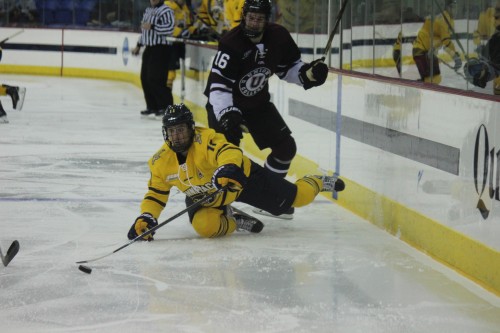 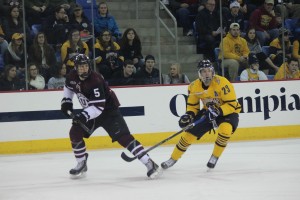 “I give credit to Union, they found a way to win tonight,” Quinnipiac head coach Rand Pecknold said. “It was frustrating. It’s not something you see a lot of in hockey, [when] you look up at the clock and we’re outshooting them 41-9 and we’re losing 4-1, but that’s hockey.” 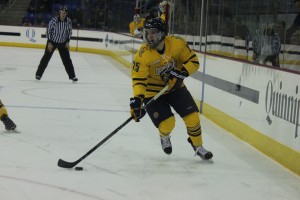 The Bobcats jumped on the board first on Saturday, taking just under 17 minutes to register the game’s first goal on the power play.

The goal on the man-advantage belonged to a relieved Duane, who scored his first of the season and first as a Bobcat after sitting out the 2015-16 season as a transfer from Boston University.

“I thought [Duane] had a great weekend. He’s had four games since he’s been back from injury and he’s been really good,” Pecknold said. “It’s all part of the process for him of learning our systems…he’s not really in game mode still. He’s getting there, learning things that we need him to do and he’s a nice player.”

Quinnipiac dominated the rest of the first period, but was kept at a close 1-0 score due to the excellent effort of Union goaltender Alex Sakellarupoulos.

Sakellarupoulos made 18 of his 52 saves in the first period, serving as a large help in swinging the momentum Union’s way going into the second period. 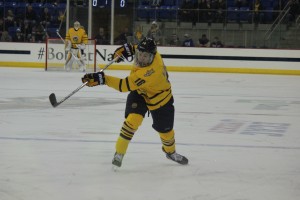 “Give them credit, their goalie was excellent,” Pecknold said. “Sakellarupoulos was by far the best player on the ice.”

Despite the Bobcats’ 14 second period shots on goal, the Dutchmen were the ones to capitalize on the scoresheet, scoring three in the period.

The first goal came from DeSimone, who potted his fourth of the season from a strange bounce off a Quinnipiac defenseman. The next Union goal belonged to defenseman Jeff Taylor, who snapped a shot home just four minutes after DeSimone’s tally.

The third and final goal of the middle period came off of DeSimone’s stick again, this time cleanly beating Quinnipiac goaltender Chris Truehl on his blocker-side.

Union’s goal scoring did not stop in the third period.

Forward Cole Maier rifled a shot past Truehl’s glove 6:15 into the period to extend the lead to 4-1.

It would be the goal that prompted Truehl (who made just eight saves on 12 shots) to be replaced by freshman netminder Andrew Shortridge.

The goalie change may have sparked the offense, as Cukste buried his fourth of the season just minutes after Truehl was pulled. 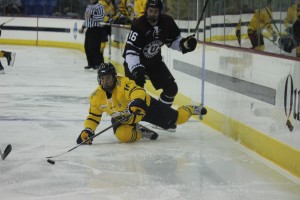 Despite the strong offensive zone pressure with 10 minutes remaining, Quinnipiac continued to struggle to find the back of the net.

“It’s the same kind of story as last night,” forward Tim Clifton said. “We put up a lot of shots and last night the puck is falling in the third period, tonight they don’t fall. That’s just how she goes.”

Union’s icing on the cake came in the form of an empty-net goal to make it a 5-2 game. Mike Vecchione, the nation’s leading scorer this season, put it home to seal the deal for the Dutchmen.

The Bobcats head to Princeton on Dec. 9 in hopes of regaining their winning ways.