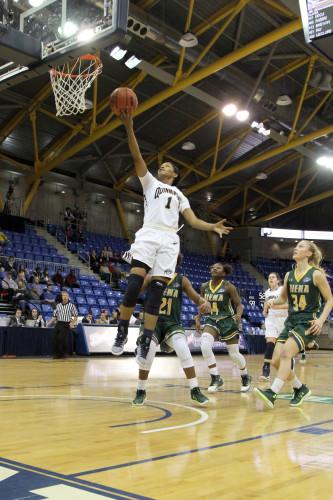 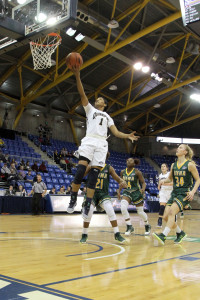 “The defense continues to be a constant for us,” Bobcats head coach Tricia Fabbri said. “I was really pleased with what we were able to do outside of the first couple of minutes defensively.” Both teams came out of the gate slowly with no scoring for nearly four minutes to start the game. The Bobcats forced ten turnovers in the first quarter but only shot 28 percent from the field. “Every shot we took was a good shot,” Fabbri said. “We just didn’t put them in, and I think when your offense doesn’t make those shots, you feel a negative effect on everything else.” The Bobcats took their first lead of the game when Morgan Manz hit a three at the first-quarter buzzer to put the Bobcats up 14-12. They didn’t trail for the rest of the afternoon. The Bobcats took a 32-26 lead into halftime and would build on their lead in the third quarter. The team went on a 15-3 run over a 4:30 span, with five different players scoring, to go up 47-33. “I just liked us in the second half playing north and south offensively and going inside with how they defend behind the post,” Fabbri said. 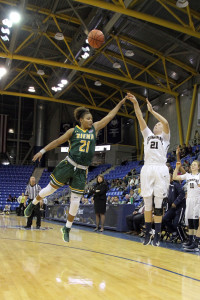 The Bobcats padded their lead even more in the fourth quarter, outscoring the Saints 23-8 to secure the victory. The Saints went only 1-14 from behind the arc (7.1 percent) and shot 33.3 percent from the field. The Bobcats held the MAAC-leading scorer, sophomore guard Jackie Benitez (21.4 ppg), to 9 points, which were all in the first half. Redshirt sophomore forward Jen Fay celebrated her birthday on Saturday with 19 points off the Bobcat bench, leading all scorers, and adding in 6 rebounds. She also made three 3-pointers. “My teammates are always finding me,” Fay said. “It just gives me the confidence to knock down the shot. Freshman forward Vanessa Udoji was the second-leading scorer with 13 points in 18 minutes off the bench for the Bobcats. “I think it’s just coach taking a chance on me,” Udoji said. “My teammates are helping me out, coaching me up. I think my energy on defense translates into offense and gets my shots up.” Fabbri has also appreciated the performance her freshmen reserves have been giving. “It’s been time and understanding,” Fabbri said. “It’s starting to really move forward with all our rookies.” Sophomore forward Aryn McClure led all players with 12 rebounds. Up next, the Bobcats will host an out-of-conference game against No. 22 Michigan State on Tuesday night at Lender Court in Hamden.