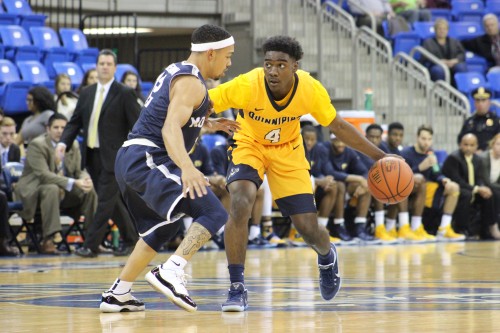 The Quinnipiac men’s basketball team began its regular season conference play as it hosted Monmouth on Thursday night. Despite an impressive showing from the team’s freshmen, the Bobcats ultimately fell to the Hawks 91-72. 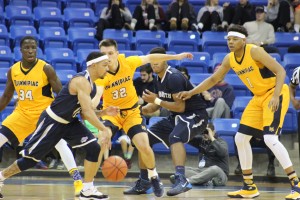 Monmouth was the preseason favorite to win the MAAC, while Quinnipiac was voted second to last in the conference coaches poll. The Bobcats needed to play a physical and well-rounded game in order to come out victorious as the underdogs. As a result of two 11-0 scoring runs by Monmouth, the Bobcats trailed by roughly 20 points nearly the entire second half and failed to overpower the Hawks.

“An impressive performance by Monmouth,” head coach Tom Moore said. “They shot the ball well, competed with a real high IQ and played to the preseason expectations that were on them.”

As for his team, Moore simply said, “We still have a lot to figure out.” 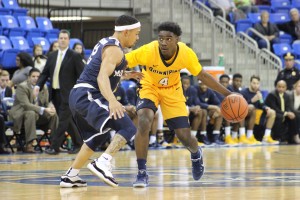 The opening minutes of the MAAC opener consisted of one sloppy play after another as both teams could not find a way to score. Quinnipiac junior guard Reggie Oliver started the game and looked to have the hot hand after knocking down an early 3-pointer. However, he would soon leave and did not return to action for the rest of the game. His absence forced Moore to provide more minutes to his freshman guards Mikey Dixon, who finished with a team-high 18 points, and Peter Kiss.

Both freshmen shined in the team’s three games at the AdvoCare Invitational last week and had high expectations by fans coming into Thursday night’s matchup. Junior forward Chaise Daniels also had an impressive showing in Orlando, Florida, most notably a 14-point double-double in a loss to Seton Hall. In the first half against Monmouth, Daniels had arguably his most dominant half this season with nine points and eight rebounds in 17 minutes. 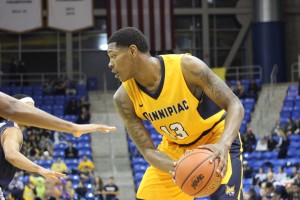 While some players shined, others failed to provide on the statsheet. Senior guard Daniel Harris, who has taken on the role as a team leader both on and off the court, had only two points in the first half and failed to hit a single shot or dish an assist over the first 20 minutes. Coach Moore quickly noted the struggle from one of his most dominant players.

“Danny [Harris] will get there,” Moore said. “He missed some open shots tonight and was really beating himself up for that. I don’t think he gives himself enough credit for how effective he can be at putting it on the deck and going by guys.”

The Bobcats trailed 45-34 at the half and could not find an answer to the Hawks’ offense, which shot 9-19 from beyond the three-point line while Quinnipiac went 3-13. The second half was no different as Monmouth’s Collin Stewart went 5-5 from three and finished the game with 20 points.

With Thursday night’s loss, the Bobcats fall to a 1-5 overall record this season. The team will have another chance to get their second win as they host Marist on Sunday at 2 p.m.