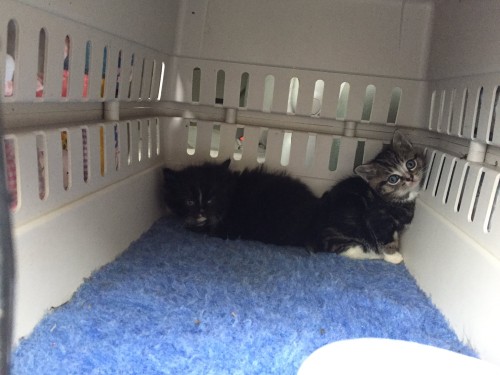 These are the two kittens who were rescued.

Members of the community gathered around a storm drain behind the Perlroth residence hall in the pouring rain on Nov. 29 to rescue four kittens that students found the night before.

Senior Superintendent of Grounds John Copela said the university was notified about the kittens late on Nov. 28. Facilities used a camera to enter the pipes inside the drain to coax the kittens out.

Facilities rescued two kittens earlier in the morning, while two more were rescued around 1 p.m. They used sandbags and a canopy to protect the opening of the drain from flooding with water.

The workers were unable to locate the mother of the kittens in the drain. Hamden Animal Control said the mother seemed healthy enough to find her way out and the kittens were the main concern.

Sophomore Kelly Cates and her roommates decided to take action to rescue the kittens before calling Animal Control.

“[My roommates] had somehow already opened the grate [of the drain] so I just jumped in there with my flashlight,” she said. “I could only see their eyes. We left some tuna out for them and we decided to call animal control to get them out because we realized we couldn’t get them out by ourselves.”

Associate Vice President for Public Relations John Morgan said he is proud of everyone involved in rescuing the kittens.

“It speaks to the compassion that everyone has on campus to try and get those kittens to safety,” he said.

Vice President of Paws for People Arianna Gagliardi was also one of the students involved.

“For me I consider the kittens an emergency if they’re stuck,” she said. “They’re not human, but they still need love and compassion.”

Stuart Hawkes of Super Paws Rescue was also on the scene. He said the main concern was to make sure the kittens weren’t flooded out by the rain.

“Hopefully they are going to have a nice home,” Hawkes said. “[The kittens] will be with us until they are fully vetted and then they will go up for adoption.”

Cates said she plans to adopt one of the kittens and name it “Q” because it was rescued at Quinnipiac.

“I love cats and I would do anything to rescue cats,” she said. “This experience makes me feel really happy because there are so many people here and it’s just for the cats.”

Facilities found the mother of the four kittens around 12:45 p.m. on Nov. 30 in the Hilltop parking lot. She is being transported to Super Paws Rescue.

Super Paws also said there has been a lot of interest in the kittens rescued from the drain, but applications will not be sorted through until the mother is safe and reunited with her kittens. It will be at least a month before the kittens and the mother will be put up for adoption. 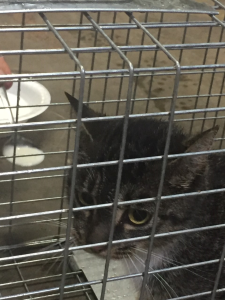