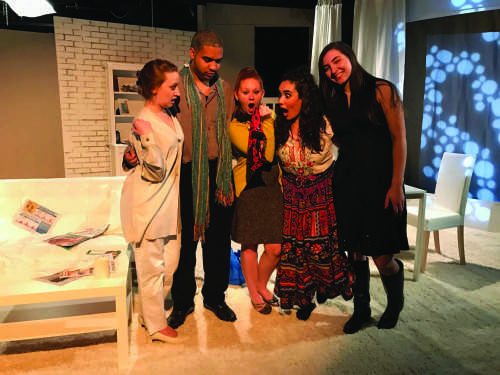 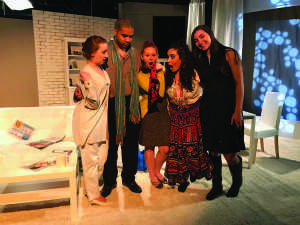 [/media-credit]Quinnipiac’s theater department proved that fact in its four productions of Sarah Ruhl’s “The Clean House,” directed by Keely Baisden Knudsen, this past weekend.The comedy follows the stories of five wacky characters whose hilarious antics had the entire audience laughing throughout the play.Junior Ali Munshi said he was very impressed with the production.

“I had an absolute blast watching,” Munshi said. “I thought the overall thing was just fantastic and hilarious. [The audience] was dying.”

Lane, portrayed by senior Amber Hopwood, is a doctor who has just hired a Brazilian woman named Mathilde, portrayed by freshman Lauren Salatto-Rosenay, to clean her house. However, Mathilde hates to clean. Instead, she sits around all day trying to think of the “perfect joke.” She says her father was the funniest man in Brazil, and when he told a joke to her mother for one of their wedding anniversaries, she died laughing. Mathilde’s father couldn’t take the pain and killed himself that same night.

Lane’s sister and noted neat freak Virginia, portrayed by senior Jennifer Dupre, tells Mathilde that she will clean for her behind her sister’s back and the two become very fast friends.

While cleaning, they find a pair of women’s underwear that are most definitely not Lane’s, which means Lane’s husband Charles, played by senior Khalid Bilal, is cheating.

When Lane finds out, Charles and his new girlfriend, 67-year-old Ana, portrayed by senior Christina Comizio, stage an interesting meeting with this dysfunctional family. It’s not until Lane learns that Ana has breast cancer that she puts her feelings aside and finds out what a wonderful woman she is.

Ana refuses to go to the hospital and get proper treatment. Instead, she asks Mathilde to tell her a joke, so that she, too, can die laughing.

Comizio said her character in this show was a new challenge she was happy to dive into and described the love her character presents to others as “empowering.”

Virginia and Lane’s estranged sisterhood causes a lot of tension throughout the play. In one scene, Virginia goes on a rampage over the fact that Lane never treats people right. Her proper behavior turns reckless as she trashes Lane’s apartment, the very apartment she’s been trying to keep clean.

“That is by far my favorite scene in the entire play,” Dupre said.

Munshi said Dupre’s portrayal of Virginia was “off the charts.”

Dupre mentioned she made it a goal for herself to be in every theater production this year and was thrilled to play the part of Virginia.

The heart of this comedy was its interesting characters, quickly spoken Portuguese and important message about caring for others.

Comizio said the success of the final performances was due to the small size of the cast.

“What was nice was that there was only five of us,” Comizio said. “It was such a tight- knit community, and we all just really had fun together.”