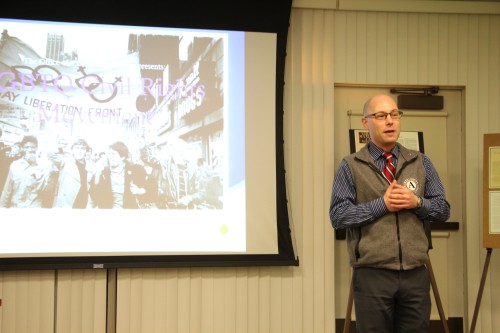 Vincent Contrucci speaks at the ‘Art of Protest’ lecture Nov. 10.

On Nov. 10, the Director of the Office of Community Service Vincent Contrucci presented a lecture titled, “The History of the Lesbian Gay Bisexual Transgender and Queer/ Questioning [LGBTQ] Civil Rights Movements.” This event was a part of a series called “The Art of Protest,” which was created by the Department of Community Service and the Department of Cultural and Global Engagement at Quinnipiac University.

The Art of Protest featured separate presentations exploring different forms of protest, including art, as ways to express perspectives. At his event specifically, Contrucci elaborated on several major protests created by the members of the LGBTQ community. The protests were in response to the injustice they endured dating back as far as the 1950s.

Assistant Director for Multicultural Education Pascale Jean-Jacques said that Contrucci brought up the idea to create a series of events that related to more modern protests, such as the Standing Rock and Black Lives Matter movements.

“When Vince Contrucci approached me with the idea, I thought it was great and timely given national and campus climate around protest,” Jean-Jacques said in a statement. “Through the variety of events that were held, I hope that students understand and recognize we all play a role in achieving social justice, historical context is key and that there’s always so much to know and learn.”

Contrucci said he has been wanting to develop this project for a number of years.

“My main issue was really for people to think about the ways in which people involved in the gay and lesbian civil rights movement used protests in a variety of different forms to move their agenda forward,” Contrucci said. First-year graduate physical therapy student Bianca Waffenschmidt identifies as a member of the LGBTQ community. She said she has worked with Contrucci before to compile history on the community for a program she does through the Office of Fraternity and Sorority Life called “Greek Allies,” which promotes inclusivity in the Greek community at Quinnipiac.

“[Contrucci] told me about this, and he said we were going to go a little more in- depth, so I was excited to hear more about it than what I was able to hear in our one hour meeting prior, so [the event] definitely got a lot more in-depth here,” Waffenschmidt said.

Contrucci introduced an audience of students and faculty to some of the major protests that impacted the gay community and how organizations unified in order to shape the community into what it is today. Each group worked to raise awareness for equality, to challenge the status quo and to motivatepeople to take action, according to Contrucci.

“It started with the Mattachine Society and Daughters of Bilitis who were like, ‘Oh, please accept us to be normal,’ pleading with psychiatrists to tell them they were okay or finding some colleague in that ‘We’re just like you, we’re just slightly different’ to the gay liberation, who were like, ‘We’re here, we’requeer, get used to it!’” Contrucci said.

Contrucci addressed other protests movements including the Gay Liberation Front, the Stonewall Riots and the Gay Activists Alliance. Well-known safe havens such as the LGBT Community Center in 1969 were brought up as well, as well as the activism of the Gay and Lesbian Alliance Against Defamation (GLAAD) and the Lavender Menace. Contrucci said the protest he found most motivating was the “Act Up” protest that occured in the late 1980s. Act Up is a nonprofit organization that involves a diverse, non-partisan group of individuals who are committed to direct action to end the AIDS crisis, according to its official website.

During its early years, members of Act Up worked to combat the inaction of the federal government and local health authorities to the AIDS crisis. Many people in Act Up had been diagnosed with AIDS, and because they were a part of the LGBTQ community, many hospitals at that time would not treat them. Because of this, many died within one or two years after their diagnoses, according to Contrucci.

The LGBTQ community involved with the Act Up protest cried out against the in- justice they faced, going so far as to throw the ashes of their loved ones who also died from the AIDS virus on the front lawn of the White House to shame the two then recent presidents, Ronald Reagan and George H. W. Bush, for their inactivity regarding AIDS research, according to Contrucci. This form of protesting is what Contrucci found to be very inspirational.

“[The Act Up protesters] were going to die because when you had full-blown AIDS in that time… you were dead within a year to two years,” Contrucci said. “So, really deciding to dedicate your time to political actions like that really speaks to the anger that they felt and the desire to see things change, and I think that’s really powerful.”

Contrucci said that the people involved in Act Up took incredible measures in order to receive the equality they deserved and made their demonstrations an art form, and that’s what he wanted to impress upon his audience on Thursday.

“I wanted them to think about, ‘How do you use protests in order to move your agenda forward?’ and, ‘How do these groups do it, and how do they learn from other people?’” Contrucci said.