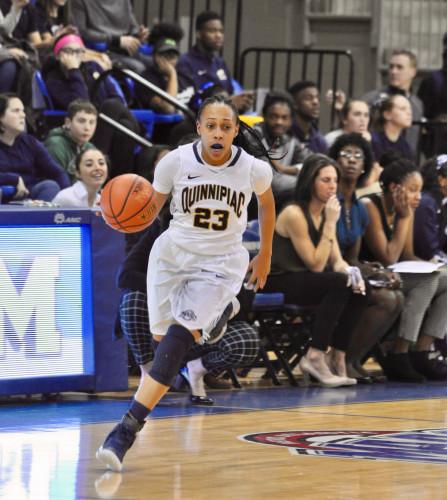 The Quinnipiac women’s basketball team (1-0) had a 40-point second half to earn a 66-56 win in its season opener at home Friday afternoon over Florida Gulf Coast (0-1). 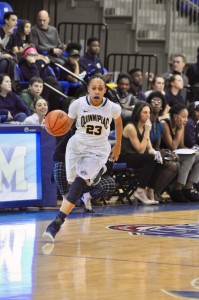 The Bobcats shot 29 percent from the field and trailed the Eagles 27-26 at the end of the first half.

The game turned with 6:29 left in the third quarter when the Bobcats were leading 32-31. Bobcats senior forward Morgan Manz made a pair of free throws to put them up by three.

Junior guard Brittany Johnson would get a steal on the defensive end. Senior guard Adily Martucci then took advantage on the next possession, making a jump shot to open the lead to five. After the Eagles split a pair of free throws, sophomore Paula Strautmane hit a jumper to put the Bobcats up 38-32.

“Just getting into a grove and finding a rhythm is really important,” Fabbri said. “And when you know when you’re playing the level of competition that we are, you’ve got to find ways to just relax and play better sooner. We did that out of the locker room, and I’m pleased about that.”

This was all part of a 14-5 run where seven different players scored for the Bobcats to give them a 46-36 lead to end the quarter.

“We have so much depth and everyone can score,” Martucci said. “I have faith in all my teammates to score.”

Florida Gulf Coast started the first 3:15 of the fourth quarter on a 13-6 run that cut the Bobcats lead to 52-49. The Bobcats immediately bounced back, going on a 9-2 run over the next three minutes to give them a 61-51 lead with Martucci scoring five points on the run.

Quinnipiac wouldn’t see its lead get smaller than seven for the rest of the game and didn’t allow a point over the last 2:45 of the game to seal the deal.

The Bobcats ended up shooting 50.6 percent from the field in the second half. Martucci and sophomore forward Aryn McClure led the team with 14 points. 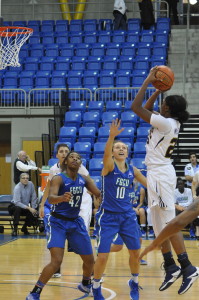 “We just all relaxed,” McClure said. “At first we were kind of rushing our shots and weren’t making them. We kind of got a little discouraged. Coach just said ‘take your time, it will fall.’ I think our team defensively helps as well. Our defensive is on our offense clicks. Us locking up more in the second half got us more in a rhythm offensively.”

McClure also led both teams in rebounds (8) and assists (5).

The Bobcats were able to get the Eagles to turnover the ball 22 times.

“I believe we are in the process of becoming one of the best defensive teams we’ve had at Quinnipiac with our length in number and our athleticism across the board,” Fabbri said. “We want to continue to develop that identity for ourselves so I think we’re going to get after people.

Friday’s win came after the Bobcats had lost at Florida Gulf Coast the past two seasons. The Eagles were also ranked seventh in the College Insider preseason mid-major poll. The same poll ranked the Bobcats at 13th.

Quinnipiac will play its next game at Dayton to play the Flyers on Sunday afternoon.