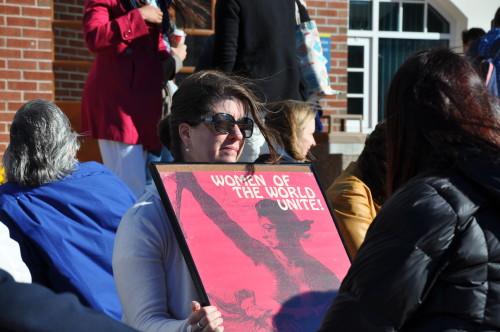 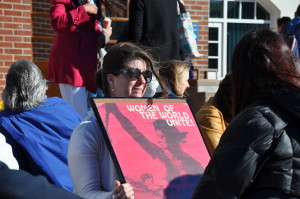 Nearly 30 professors and students gathered on the Arnold Bernhard Library steps to participate in a peaceful protest around 12 p.m. on Friday, Nov. 11.

The protest was organized to mourn the 2016 presidential election results, which named Republican nominee Donald Trump as the next President of the United States, according to English professor Ruth Kaplan.

“For me, it’s a national tragedy,” Kaplan said. “When there’s a tragedy, there’s… grounding and healing to come together in mourning. The first step towards a future of resistance and action is to gather with like-minded people and learn from their reactions and be inspired by the changes they plan to make.”

Some of the protesters were handing out safety pins to symbolize that the library steps were a safe space. 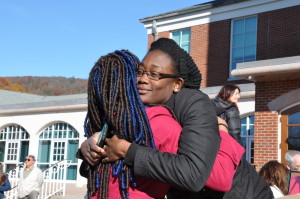 Protesters were also taking turns reading poems and sharing experiences. One professor was playing guitar and others were singing along. Tour groups were walking through the library and across the Quad as the protest continued.

There was no specific message intended to result from the protest, according to Shana Clarke, assistant director of advising and student development. She said the protest was organized to support one another and show solidarity.

“This is real, and this is going to have long-lasting implications,” Clarke said. “It takes seconds to tear something down and decades to build it up. I think it is important for people in this community to see that there are others who are as concerned as they are and start to recognize their faces and know that they have safe spaces on campus that they can go to have that conversation.” 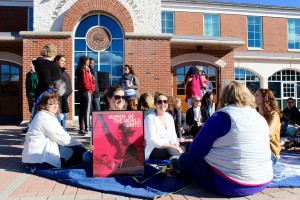 Diane Ariza, associate vice president for academic affairs and chief diversity officer, attended the protest. After the protest, there are hopes to continue the movement with teach-ins and education sessions about what is currently going on in the nation and the world to unify the community, according to Ariza.

“This is just a small, very small way of saying we are moving forward and we need to be together,” Ariza said. “It’s not political, Republican or Democrat. It’s about coming together to talk about it as women.”

Senior Olivia Hilton, who identifies as LGBT (lesbian, gay, bisexual and transgender) student was walking to class when she noticed the peaceful protest. She said she 100 percent agrees with and supports the members of the community who are protesting.

“Everything that has happened within the past week has caused a lot of anxiety for a lot of minority people,” she said. “Being an LGBT student, I feel a little bit of anxiety after this election.”

Hilton said she hopes this peaceful protest will start a conversation on-campus that will be productive. 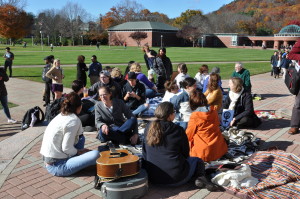 “I think that it will get people to talk. It will get people to debate and hopefully in a very friendly and non-aggressive way,” she said. “That is the most important thing you can do is have open discussion without arguments, because even if I don’t agree with someone, I will never tell them that they’re wrong.”