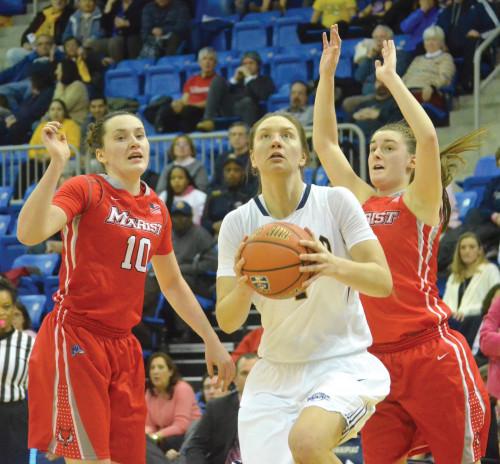 After falling just short of the MAAC tournament crown last season, the Quinnipiac women’s basketball team is locked and loaded for another run at the conference title. 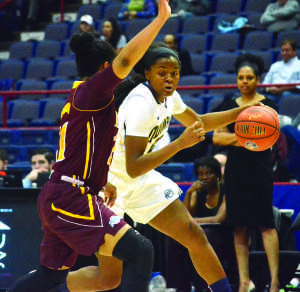 Returning the bulk of their starters along with five new freshmen, the Bobcats enter the season ranked first in the preseason MAAC poll, as well as No. 13 in the College Insider Mid-Major poll. Expectations are high for the Bobcats, but the aspirations in their own locker room are higher than any poll could describe.

“In terms of a program goal, we want to finish what we weren’t able to last year in the MAAC and cut down those nets and get to the NCAA Tournament,” head coach Tricia Fabbri said. “We feel we are ready to make a mark in that tournament and not just get there, but to win a game.”

The Bobcats lost the MAAC Finals last season to Iona by four points, failing to make their triumphant return to the NCAA Tournament after earning a bid in the 2014-15 season. Fabbri believes coming so close last season after getting a taste of March Madness the season before only heightens the team’s urgency to get back to the top of the MAAC.

“Once you get a taste of getting into the dance and cutting down those nets, you’ll do anything to get that back,” Fabbri said. “It’s an addictive feeling, and we certainly feel we will be able to do it.”

The Bobcats will be returning 10 players to a team that was able to record a victory in the NIT last season, and will open up with an immediate test against Florida Gulf Coast University, currently ranked seventh in the Insider Mid-Major poll, on Friday afternoon. FGCU downed Quinnipiac 71-70 in overtime last season, but the Bobcats are eager for a tough matchup right out of the gate to gain a quick sense of who they are as a team.

“Our nonconference is very competitive this year, so starting off slow wouldn’t help us,” sophomore Aryn McClure said of the early portion of the schedule. “Starting off with FGCU will be good for us to come out with a bang, especially if we can leave with a win.”

McClure is coming off a freshman year where she won the MAAC Rookie of the Year and was named to the All-MAAC third-team. This season, McClure finds herself on the MAAC preseason first team. Despite heightened expectations, the sophomore will look to keep it simple once the curtain rises on the 2016-17 season.

“I’m not feeling any pressure,” McClure said of the upcoming season. “My mentality is just to play hard every single game.”

Fabbri isn’t pinning any expectations on McClure, but knows how good she can be.

“Aryn is a special player because of her athleticism, her length, her ability to shoot the three from inside and to create and pass the ball,” Fabbri said. “She’s just such a nightmare to guard.”

Alongside McClure will be fellow sophomore Paula Strautmane, who is coming off a stellar rookie season herself. Strautmane was a unanimous selection for the All-MAAC Rookie team last year after averaging 8.8 points and 6 rebounds per game in her freshman campaign. 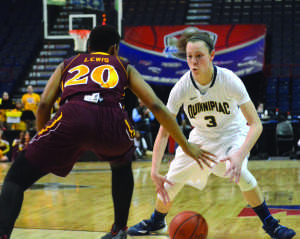 Aside from the sophomore duo, Fabbri has her eyes on a pair of upperclassmen to be major contributors for the Bobcats this season. Seniors Adily Martucci and Morgan Manz have caught Fabbri’s attention with their preseason performances, and have both been named team captains.

“It’s a huge compliment,” Martucci said of her second straight captaincy. “It gives me a lot of confidence when it comes to having a leadership role.”

Martucci’s message to her teammates is to focus on the details.

“All the little things do add up, and they do matter when it comes down to a crunch game. One wrong move and that can mean the whole thing,” Martucci said. “For our team, we need more sharpness. All the little things matter. To do everything right all the time, which is very hard to do for anytime. I think that’s the biggest message.”

“I thought I had a terrible season,” Martucci said. “I know my teammates need me for those stats, but we also have such an amazing team in itself. The depth is insane. I think what my team really needs me to do is lead and everything else will come. If I’m having a bad day, I know someone’s going to pick me up.”

Fabbri believes the strength of her team doesn’t come from any single player and that her team’s depth will be unmatched in the conference. She alluded to the versatility of her Bobcats being a problem for opponents this season, highlighted by junior Sarah Shewan among plenty others whom Fabbri has an eye on to make major contributions.

“You can go all the way around. With Carly [Fabbri] playing the one-two, you also have Brittany Johnson and Edel [Thornton] who are freshmen-to-sophomore with that experience coming back and getting all of those reps in practice and have made huge jumps,” Tricia Fabbri said. “The versatility that we have within our roster and not just a player that can do one thing is a strength across the board that makes us really interesting and tough to guard.”

Tricia Fabbri also expects her freshmen to have a role in the team’s success this season. 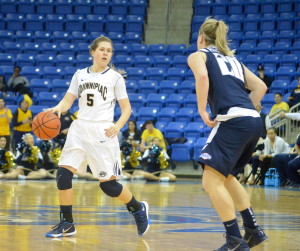 While Tricia Fabbri likes her team’s chances to win the conference, she knows that the road to get there will be tough.

The Iona Gaels, who defeated the Bobcats in the MAAC Championship game last season, are ranked second in the preseason poll.

“Iona returns [Marina] Lizarazu, who is a heck of a player and a complementary cast,” Tricia Fabbri said of Iona. “They had the [conference] sixth person of the year in [Alexis] Lewis who is back for them and a talented roster and recruiting class.”

The Bobcats’ first conference game is on Dec. 1 when they travel to St. Peter’s, and the conference tournament will take place from March 2-6, 2017 in Albany.