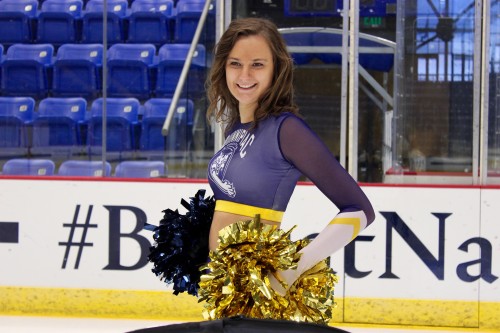 A crowd of thousands anxiously await a glimpse of the Quinnipiac men’s ice hockey team. The arena goes dark as 16 young women bravely step onto the ice, but it is not their uniform nor their dance moves that distinguish them. It is their passion and commitment as IceCats that unify this close-knit group of ladies both on and off the ice.

In their fourth full season, the IceCats have become an impressive force as Quinnipiac’s ice hockey cheerleading team. 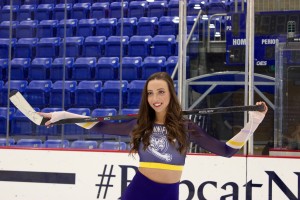 Men’s ice hockey head coach Rand Pecknold formulated the concept of a cheerleading team on ice and reached out to the coach of the basketball cheerleaders, Michelle Coppola. She has led the squad since its inception and gained significant popularity amongst the fans at Quinnipiac’s TD Bank Sports Center.

“They are very well-recognized now,” Coppola said. “Most people want to get on the team as soon as they hear about ice skating cheerleaders because it’s different. There are a lot of girls out there who can skate and have great dancing abilities that want to be able to cheer for a team. The combination of the two complement each other very well, and that’s what I’m looking for in an IceCat.”

Requirements for potential IceCats are simple, yet complicated. Coppola says while anybody can say they can dance, not everybody has the ability to follow a rhythm while figure skating in front of a large crowd. Although rhythm is an essential asset for potential members, Coppola values those who have a high level of confidence in their ice skating ability.

“You really need to be able to skate. You can’t be afraid because as soon as those lights go on and those girls get out there with people cheering, you need to be confident on that ice no matter what,” Coppola said. “I also want them to be engaged with the crowd, which is really important. I’ve never had an IceCat who has gone out there and been miserable or not truly into the crowd.”

For sophomore Rachel Roman, joining the IceCats was an opportunity to try something new.

“Tryouts [were] the first time I ever stepped on the ice,” Roman said. “I just went for it because I loved to cheer, but I wanted something different.”

Reflecting on her time as an IceCat, senior Taylor Chelo noted how every member of the team brings something unique to the table. While Chelo was never a cheerleader like Roman was, she has been a competitive figure skater for 14 years. 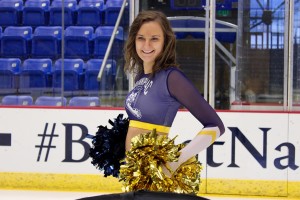 “I think it’s good that we have both of us because we each show two different sides of the spectrum as far as the skills go on our team,” Chelo said. “I think that’s what the IceCats are really great about. It’s that everyone has their strengths and weaknesses, yet we’re able to collaborate together and help make it the team we’ve always envisioned it to be.”

The IceCats has become a great way for Quinnipiac students to find a unique sense of unity on campus.

“Just having a team of sisters has been the greatest part of it all, because as freshmen we’re nervous about meeting new friends and everything,” Chelo said. “Having those friends you gel so well with and a team to identify yourself with really helps the transition to Quinnipiac as a freshman.”

Roman said she is grateful for the IceCats’ help in making the transition to college more smooth but is most thankful for Jackie Gray, who passed away on July 4, 2016 from injuries sustained in a motor vehicle accident.

“Jax [Gray] and I didn’t know how to skate, so we were buddies right away,” Roman said. “Ice practices were hard and my feet would always hurt, but it’s been great and I’m glad I’ll always have the IceCats to go to.”

Last year, the IceCats were fortunate enough to have Gray not only as a teammate, but also as an individual whose positive spirit left a tremendous impact both on and off the ice.

On Saturday, the Quinnipiac IceCats, Dance Fusion, Sideline Cheer, Dance Company and Kickline organized “Celebration of Life,” a show dedicated to honoring Gray’s memory. A bench by the tower at the Sleeping Giant State Park was officially unveiled in early October to commemorate Gray’s life. Later, thousands gathered to honor her legacy at a memorial hockey game where “Jax” would have a special tribute from the IceCats family.

Since her passing, Coppola says she hasn’t let anyone forget Gray’s impact on not just the team, but the Quinnipiac community as well.

“There hasn’t been a practice that we haven’t brought her name up,” Coppola said.

The team mainly wears purple at all of their practices to commemorate Gray’s life, Coppola said.

Although she gets the same feeling every time she steps on the ice, Chelo said this year has a bigger purpose in the wake of Gray’s absence.

“It’s still electric seeing the whole place filled with nothing but blue and gold and all these people packed to the capacity,” Chelo said. “Being those first people to step on the ice before the players even get on is such a big deal. It really just goes to show you how much of a powerhouse TD Bank is and how much we’re a part of that experience.”

The IceCats practice roughly five hours each week depending on the ice hockey schedule, but Coppola says the time commitment is manageable.

“It does get intense as soon as the season start rolling around because we could have multiple practices and games in a week,” Coppola said. “We’re a family, and we look out for one another. If you need us, we’re here. If you need me, I’m going to be there for you whether it’s time off, a break or just somebody to talk to. That’s how we run this team.”

After their performance on the ice, the IceCats head up to the bleachers where they perform an array of dances and cheers between whistles.

Coppola said that although she has full confidence in her team, they can’t forget their purpose. 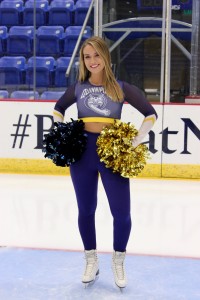 “They’re there to not only engage the home crowd, but also other people that may be looking to be inspired by Quinnipiac,” Coppola said. “They need to be diligent with their dances and not sit there and talk because you never know when the camera is on you. I don’t have to remind [them] of that because they know what their job is. They want to not only be a part of this team and encourage other people, but also to be there for the fans, especially the little kids who come up to them and ask for pictures.”

The IceCats are not only performers, but they are also representations of the Quinnipiac University community.

Chelo expressed how a lot of people lose sight of the fact that when you wear a Quinnipiac logo, you’re representing the university.

“We’re a positive representation of that, and to me, that’s what it truly means to be an IceCat,” Chelo said. “Sharing whatever passion you have with a close-knit group of girls, just to come together and express it is something special.”