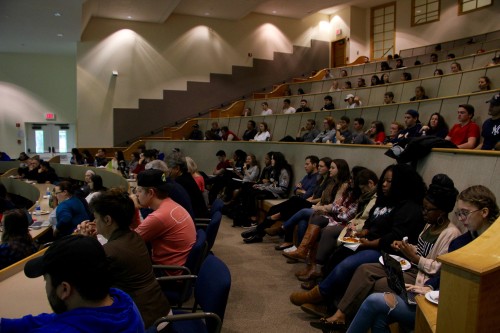 Members of the Quinnipiac community gathered in the Mount Carmel Auditorium on Nov. 9 to discuss the 2016 presidential election results.

Students, faculty and staff joined together to discuss the the civility and health of the United States democracy after the 2016 presidential election in a panel coined “A Day after the Election… Now What?” according to a flyer advertising the panel. The event took place in the Mount Carmel Auditorium on Nov. 9 at noon.

At approximately 3 a.m. on Nov. 9, Republican nominee Donald Trump was announced as the president-elect over Democratic nominee Hillary Clinton. The panel concentrated its discussion on the future of the nation’s tenuous cultural civility and how such a divisive atmosphere manifested itself within American society.

Duffy began the discussion by addressing the alarming rise of nativism and populism within the country, which reflected a radically shifting political landscape.

“This has been a watershed election, filled with decidedly negative campaigning,” Duffy said. “Mexicans were called rapists, Muslims labeled as terrorists, women had been overly objectified and even the age old trope of anti-Semitism resonated throughout.”

Duffy said much of the outcome had to do with a decisive split down gender and racial lines.

“The sharp increase of populism in this current election was because of a large white nativist movement,” Duffy said. “One that we see parallels Western Europe as well, in such cases as the Brexit vote.”

One member of the audience asked the panel how such a division was possible within modern American society. McLean responded by saying Trump gave voice to the pain and anger of many voters.

“A winning moment for Donald Trump’s campaign was during one of the general election debates when he directly addressed the crowd saying, ‘I feel your anger,’” McLean said. “Donald Trump connected with the voters on a personal level and gave license for people to be angry.”

Sophomore Warren Webb said he was surprised that Trump won the election. He believed the outcome opens the door for less civility among Americans.

“I think Americans are going to be more blunt and direct about how they really feel now,” Webb said. “There’s going to be a lot more destructive opinions.”

Trust was another issue brought up during the forum. The trust Americans have for one another is declining further with every generation, according to McLean.

McLean explained that there’s a need in our society for more debate and discourse with opposing ideas, or a reaching out to the other side to understand different mindsets. The philosophy and political science professor was amazed by the highly polarized culture.

“Thirty percent of Trump and Clinton supporters didn’t know a single person who voted for the other side,” McLean said. “Nineteen percent of voters said they were angry about the overall election and only 3 percent of Americans believe government will always do the right thing.”

“What happened yesterday was not the failure but triumph of American democracy,” Brown- Dean said. “Democracy doesn’t require consensus.”

She elaborated on the differences between a trepidation about the future of civility and everyone’s voice being heard.

“We don’t have to agree with one another, civility is about recognizing one another,” Brown- Dean said. “It means I have enough respect for you to say I disagree and this is why.”

Most attendees of the forum were seeking answers. Vocal members of minority groups, especially those in minority groups Trump targeted throughout his campaign, expressed fears now that Trump is the president-elect.

One attendee, sophomore Lauren McGrath, expressed her anger on Trump’s rhetoric that she said would damage civil rights for the lesbian, gay, bisexual, transgender and queer (LGBTQ) community.

“I’m scared that with this election result, every stride that was just made for this community will be reversed,” she said. “Having someone in office who is against people who stand for nothing but love is horrifying to me.”

Shock still remains the overall consensus for a number of Quinnipiac students.

Junior Kirsten Fraser was stunned by the results of the election. Fraser said she believes minority groups will have an extremely hard time finding their equal place in American society now. She went on to make a prediction on Trump’s presidency.

But senior Patrick Johnson said there is still hope for unity.

“It seems divisive now, but we need to come together despite the ‘anti-Trumpers,’” Johnson said. “Even Clinton said we need to remain united as a nation.”