School of Communications dean to retire 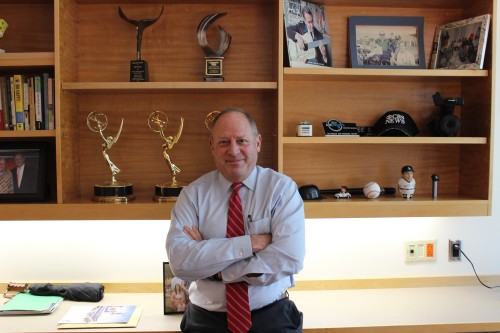 Kamlet will celebrate his sixth year as dean of the School of Communications in April 2017.

Dean of the School of Communications Lee Kamlet plans to retire at the end of this academic year, approaching his sixth anniversary at the university in April, after a 32-year career in broadcast journalism.

Michael Baird, a sophomore journalism major who serves on the dean’s advisory board, said the first word that comes to mind when he thinks of Dean Kamlet is personable.

“My dad and I met him at Accepted Students Day in 2014, and my dad made me go introduce myself to him as a prospective student. I was nervous introducing myself, a high school senior, to someone as important as the dean,” Baird said. “Right off the bat, I could tell Dean Kamlet cared about students in the School of Communications.”

Kamlet did not have any prior experience in the world of higher education before coming to Quinnipiac. Despite attending Colorado State University and earning a degree in political science, Kamlet’s career was in television news production.

He started out at a television station in Cheyenne, Wyoming as a sports and government reporter. From there, he worked for a station in Casper, Wyoming, then started with CNN. He found himself at ABC by 1981, where he worked for 22 years. He was also at NBC for 10 years.

“I like to say that I got to see the biggest events of 30 years in world history and somebody else got to pay my way… pretty good deal,” Kamlet said.

Once he shut off the teleprompters and packed up the cameras, Kamlet started his first job in higher education after his wife saw a job posting in the New York Times for the dean of the School of Communications at Quinnipiac. Since accepting, Kamlet said he has learned a lot about himself.

“I’ve learned that there are some decisions I had to make that were hard decisions, some of which that if I could do over, I would do differently,” Kamlet said. “But I’ve also learned that it’s good to make decisions… you can’t

As dean, Kamlet tries to maintain connections with students in the School of Communications community. One way he does this is through his student advisory board, in which he tries to include a diverse group of majors and years.

“I feel strongly that this is their school and they need to take ownership to the extent that students can, and [the student advisory board has] given me some really good insight on what works and what doesn’t,” Kamlet said. “It has helped the students connect with the school, and I share their ideas with the faculty.”

Kamlet is very proud of everything the School of Communications faculty and staff have accomplished during his time at the university. Kamlet said he is amazed at how the faculty connects with students, how accessible they are to students and how they are constantly striving to make sure the curriculum is up to date.

Kamlet said he does not plan to take another position as an administrator nor does he plan on going back into the journalism field.

In terms of his retirement, Kamlet does not have any plans. For him, retirement means doing some personal writing and studying, sitting on the beach at his house in Fairfield and most importantly, making time for his family.

“I met my wife in college. She’s my best friend. We’ve been married for 40 years,” Kamlet said. “We’re going to do some traveling. We just became grandparents, so I really have no immediate plans.”

When asked what he feels he has contributed to the School of Communications at Quinnipiac, Kamlet said he will leave that up to others to decide.

Junior journalism major Dorah Labatte, who is also a member of the advisory board, gives Dean Kamlet credit for effectively implementing his ideas.

“Not a lot of people say things and actually make them happen,” Labatte said. “Kudos to Dean Kamlet for not falling under that category of people in positions of power that never actually deliver.”

Kamlet expressed how grateful he is for having the opportunity to serve as dean. He said it has been a huge privilege for him. It is one of the greatest experiences he’s had.

“The good thing is that I’m not leaving with any bad feelings towards the university certainly or the administration or students or anything,” Kamlet said. “This is really something that I’m doing for myself and my family, and I don’t think there’s a better reason than that.”