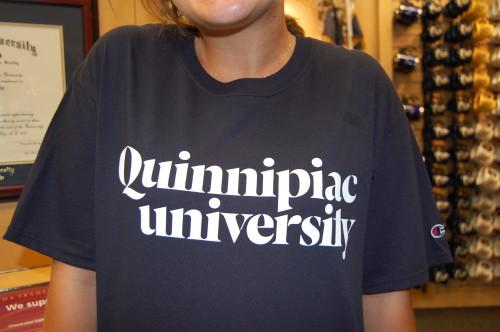 The current Quinnipiac logo features a lowercase “u,” which has caused controversy within the student body.

The event was created in order to give students a chance to learn and ask questions about the new branding initiative. The purpose of the event was misconstrued and that, in turn, led to the cancellation of the event, according to a statement made by SGA.

“It was brought to our attention that the intention of the event was misinterpreted and falsely advertised by multiple parties to members of the Quinnipiac community,” the statement said. “In the best interests of everyone involved, we thought it best to cancel the event.”

Sophomore Haleigh Sullivan said she believes the event was a missed opportunity to hear the voice of the students.

“But I think they should have had it because students have a voice on campus,” Sullivan said. “The students are the campus. They make the school. If they aren’t going to listen to us or listen to our voices, what’s the point of it?”

Senior Brett Segelman, the creator of the “Revise the New Quinnipiac University Logo” petition, stated he saw this event as an avenue for administration to hear the voice of the students. When Segelman was notified that the event was cancelled, he said he believed it was an effort to suppress the voice of the student population.

“Now to me, it sounds like they are trying to suppress the criticism that this logo has created,” Segelman said. “And they probably know that I’m a very vocal figure against it, and they didn’t want to deal with the PR nightmare that would have ensued likely with a large audience of people who are not very fond of the logo.”

Segelman’s petition was created in September 2016 in an effort for students to show their dislike for Quinnipiac’s new logo. The petition started with one signature and as of Nov. 8 at 5:19 p.m. has 1,145 signatures and more than two hundred comments detailing student’s dislike for the logo change.

Segelman said he is confident in his belief that he speaks for the majority of the student population when he says there is a mass disapproval for the new logo.

“I would say it is virtually unanimous that the logo is disliked except for those who were associated with orientation leaders because they were conditioned to approve the logo by Mr. Rhodes over the summer,” Segelman said. “So most of them don’t have anything bad to say about it. I’m not going to say all of them, because I’m sure there are some of them that agree with me.”

Sophomore Mike Isola is just one of the students that Segelman spoke of who disapproves of the logo. Isola said his biggest problem with the logo is with the lowercase “u.”

”We’re associated with Yale and Harvard and all of these Ivy League schools,” Isola said. “So I think they should capitalize [the ‘u’].”

The university stated they would not comment on the canceled meeting, according to Associate Vice President of Public Relations John Morgan. In addition, Morgan said Rhodes was unable to comment on the matter.

Segelman said he finds the university’s lack of response problematic and that it only compounds the current problem at hand.

“They’re adding to the conspiracy,” Segelman said. “They’re trying to suppress student opposition. Look, this is the business that they are in, the PR department. People are not going to agree with everything that the school does, and as students, we certainly have the right to express our criticism and oppose what is being implemented. And for them to cancel it out of thin air is a conspiracy to suppress our criticism. So the issue now is twofold.”

Although Segelman’s petition originally focused on the new logo, Segelman planned to use the event as a means to voice his disapproval of the overall branding of the university, including the new website.

“This university is not an Apple product,” Segelman said. “The tone of the website I take issue with. I think it’s written in a sale- pitchy style. The first thing you see on our website is about recruiting is about, ‘Hey, come to Quinnipiac.’ That I take issue with, because there’s more going on here than just trying to get the next batch of freshmen or the next batch of grad students. The school should pride itself on what’s going on.”

Segelman furthered his argument by saying Quinnipiac is a non-profit university and should be presented as such.

“There are things here that are going on that are more important than money,” Segelman said. “And right now, the website doesn’t send that message to me for a multitude of reasons.”

Currently there is no set date for a new logo presentation or Q&A session, though Segelman said that he hopes for one and in the meantime does not plan to stop petitioning.