Editorial: Anybody but Trump 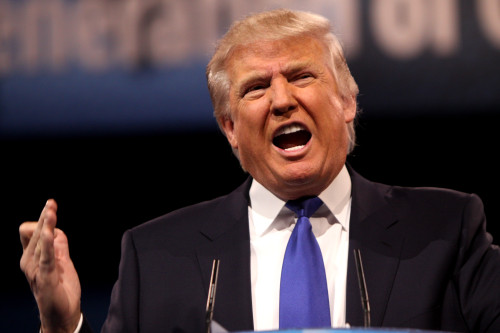 Throughout the 87 years of The Quinnipiac Chronicle’s existence, the editorial board has never taken a stance in a presidential election to our knowledge. While various members have shared personal opinions about specific political issues in the past, this is the first time that the editorial board, as a whole, has done so. We understand that our readers have a variety of values and beliefs, and have not felt the need to share ours previously, but this election is different.

When Barack Obama and Mitt Romney ran for president in 2012, most were not as concerned about the future of the country, regardless of the outcome. This year, we are not choosing between two competent nominees who have similar goals, but different methods to approach those goals.

Republican nominee Donald Trump, by unanimous consensus of The Quinnipiac Chronicle Editorial Board, is unfit for the office of President of the United States.

Ever since Trump announced his candidacy on June 16, 2015, he has repeatedly displayed that he does not possess the values, trustworthiness or the consistency necessary to be president.

Trump is prejudiced. Since the beginning of his campaign, his claims against Muslims, Mexicans and migrants have drawn outrage from around the world, though most of his supporters seem to remain unbothered.

He called for “a total and complete shutdown of Muslims entering the United States” in 2015. However, it was only until “our country’s representatives could figure out what is going on.” Not only are these racist sentiments reminiscent of mid-20th century Europe, his vagueness has become somewhat of a signature.

He expanded on his statements in September, saying that only “American hands will rebuild our nation. Not the hands of people from other nations.” Apparently, this rule does not apply to some of Trump’s buildings, which are maintained and staffed predominantly by migrant workers.

In regards to Mexicans, Trump insists on building an impenetrable physical wall along the southern border of the United States, which Mexico will pay for. It is also important to note that he has made these arrangements with Mexico’s funding without initially consulting Mexico’s president.

After speaking with the President Enrique Peña Nieto of Mexico in August, who stated that he would not pay for the wall, Trump conveniently made a slight change to his plan. Now he says that the U.S. will pay for the wall, and Mexico will reimburse our country.

These kinds of unilateral, uninformed statements are not those of a qualified presidential candidate. They are those of a businessman who spent five years peddling the “birther” movement, which erroneously questioned the validity of Barack Obama’s presidency and his natural-born citizenship. There appears to be a recurring theme with these racially-motivated assertions.

Trump is inconsistent with his positions. In fact, he has made at least 138 distinct shifts on 23 major issues throughout the duration of his candidacy, according to a list compiled by NBC News.

In an interview with Anderson Cooper on CNN, Cooper asked Trump about how he would defeat Islamic State of Iraq and Syria (ISIS, now Islamic State of Iraq and the Levant). His response? “Bomb the hell out of those oil fields” in Iraq. Trump also said that he would not send many troops, as they would be unnecessary. Just a few seconds later, he said that he would send troops to defend the oil companies that he will hire and “put a ring around them.”

His stance changed, and now the most we know about his plan to defeat ISIS is that we need computers, and it’s going to be “very, very tough.” He also cited his 10-year-old’s “unbelievable” computer skills, which shows just how much he appears to know about the intricacies of cyber terrorism. The Editorial Board is unsure of the connection between cyber-terrorism and Barron Trump’s computer skills.

We cannot support a presidential candidate who is so flippant and impulsive with matters of national security. With his extreme statements regarding the war on terror, he is unsuited to be commander in chief of our military. In fact, a slew of GOP national security leaders wrote an open letter, stating that Trump’s “expansive view of how presidential power should be wielded against his detractors poses a distinct threat to civil liberty in the United States.”

Furthermore, his comments about women and women’s rights are indefensible. At this point, many Americans are familiar with the 2005 tape that was released of a conversation between our Republican nominee and television show host Billy Bush of the politically-active Bush family. This recording includes mention of kissing, touching and groping other women, stating that “I just kiss. I don’t even wait…when you’re a star, they let you do it.” Following the release of the tape, he said that this was “locker room” talk between men. However, we have all been in locker rooms, and do not recall encountering such shameless irreverence and sexism.

Additionally, in the first debate the subject of his criticism of women’s bodies was brought up. The main example of which is Alicia Machado, a former Miss Universe who stated that Trump called her “Miss Piggy” due to her weight gain. She also stated that Trump called her “Miss Housekeeping” because she is a Latina woman. The next day, Trump actually attempted to defend his remarks on the morning show, “Fox and Friends,” stating that “…she gained a massive amount of weight and we had a real problem.”

While Trump has discussed some important issues in this election, none could excuse his blatant disrespect towards various groups of American citizens. This disrespect includes his glaring lies to the American people, which equate to approximately 70 percent of his statements, according to PolitiFact, a Pulitzer Prize-winning independent fact-checking outlet.

It is crucial that we note that this editorial is not a representation of our support for Hillary Clinton, who is also not a perfect candidate. Nor is it a jab at the Republican Party as a whole. While some Editorial Board members do support the Democratic nominee, there is not a unanimous consensus.

Overall, we encourage you to vote with your values. While most of these remarks by Trump may not seem detrimental unto themselves, compiled together, they could be disastrous. While it may be a good thing to break away from traditional politicians at some point, this is not the time, with Trump as our option. And while policy is extremely important and is not something that should be neglected when deciding the presidency, we cannot allow the figurehead of our country to be so impulsive and uncensored, especially when foreign policy is at the forefront of our national conversations.

Newspaper endorsements of presidential candidates dates back to the 19th century in America. This is something that is unique to newspapers, as most television stations, online news sources, or magazines do not endorse. The New York Times, for example, a historically democratic newspaper, endorsed Hillary Clinton in this election, and Barack Obama in the last.