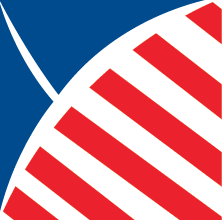 After nearly 18 months of presidential campaigning, numerous rallies and three presidential debates, the nation must decide who will be the next president of the United States. As Election Day approaches, students must decide if they’re voting and who they’re voting for on Nov. 8. The two major candidates are Donald Trump for the Republican party and former Secretary of State Hillary Clinton for the Democratic party.

Of the 110 people polled on Quinnipiac’s Mount Carmel and York Hill campuses, 38 percent of the sample said they were voting for Clinton. 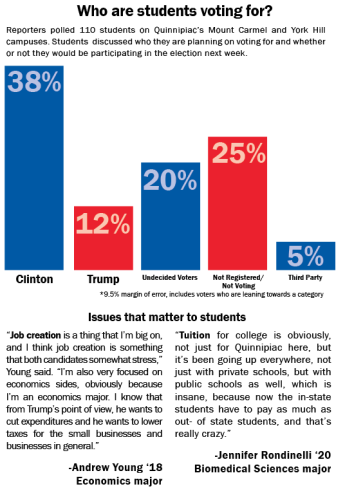 Freshman Nicole An is just one of the several students at Quinnipiac that have decided not to vote in the upcoming election. The registered independent voter said she believes in the weight of her vote.

Meech submitted his absentee ballot and marked Trump as the candidate he would like to see in the Oval Office. In his opinion, Trump will try his hardest to put Americans first and make better deals for America.

“I think that he’s an agent for change and is taking a different direction from politics as usual,” Meech said. “I’m just more scared of Hillary.”

After the scandal with Clinton’s private email server, Alderman made the decision that Trump is the candidate that she wants to see in office.

“I think that Donald Trump is more willing to protect us as a nation and go further to protect us than Hillary, obviously from what she did,” Alderman said.

The email scandal Alderman is referring to started back in August 2015 when the FBI began investigating Clinton on the grounds that classified information was compromised because of her emails. The investigation concluded in July of 2016 and the FBI director stated that Clinton was “extremely careless” but did not advise pressing charges on Clinton. The case has since been reopened as of Oct. 28 as new emails were found and are currently under scrutiny, according to USA Today.

Freshman Michelle Conca, a registered independent voter, said she can agree that neither major party candidate is ideal, but she’s leaning toward voting for the former secretary of state.

“I feel like a lot of us don’t like Trump,” Conca said. “But putting him aside, even though you might not like Hillary you don’t have that much to choose from, so you might just have to go with the lesser of two evils.”

Regardless of Clinton’s flaws, sophomore James Burnham said he’s voting for Clinton because he thinks she’s the best to serve the country.

“I think [Clinton] is what the country needs, given its social injustice problems,” Burnham said. “She‘d be the best to serve as a diplomat for foreign relations, more so than her opponents.”

Freshman Zaria Brogdon, a registered voter, said that when she saw that Trump was running a campaign, that was the moment she realized she wanted Clinton in office.

Brogdon disagrees with Trump’s proposals to prevent immigrants from coming into the country.

Though several students have made their decision, many are undecided as to who they want to see in office next year.

Junior Andrew Young is a registered voter but is undecided for the 2016 presidential election.

“It’s debatable simply because I don’t really like either candidate,” Young said. “For example, I don’t like that there’s a lot of generalization among a lot of the things that certain candidates say. They put a lot of people into one category.”

Young understands the importance of voting but stated that he is not confident in the two major party candidates. With regards to the three presidential debates, Young compared both Clinton and Trump to “two children bickering.”

“I was kind of very disappointed because these are the future leaders of my home country,” Young said.
Although there are mixed views, based on the sample taken, the majority of the Quinnipiac population will be in favor of Clinton.

Click here for a Q&A with political science professor Scott McClean about the election. 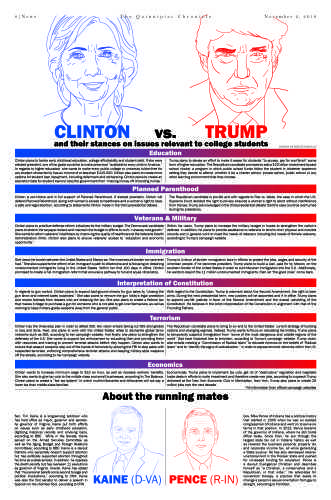