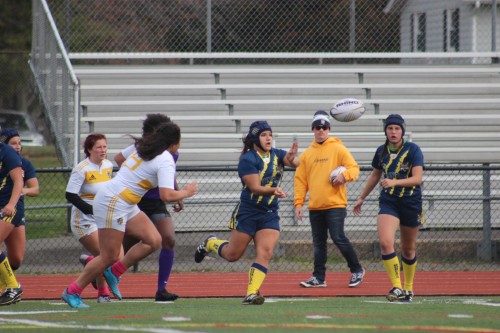 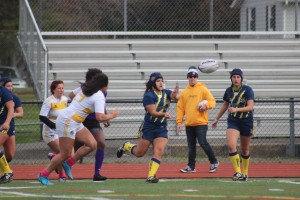 The Bobcats entered Saturday’s game with a 6-1 record coming off a remarkable 213-0 win over Castleton University, but Myles was quick to refer to their 44-0 win against AIC back in September as a point of inspiration.

“I think every time we play AIC, they come out and are ready to play hard,” Myles said. “The energy that they brought was awesome and I think it was a tough game for us.”

Quinnipiac began the game appearing to be the more physically imposing team as sophomore Emily Roskopf scored after picking off an AIC pass. Schussler, who played a key role in dominating the scrums, gave the Bobcats a 10-0 lead on a hard-fought try with just under 30 minutes to play in the first half. After Gegeckas nailed the two-point conversion, AIC responded quickly with a successful drop goal.

With 14 minutes remaining in the half, junior Flora Poole scored on an assist from freshman Niamh Savage, giving the Bobcats a 17-3 lead. Junior Karee Helgerson took advantage of an AIC penalty and scored the Bobcats fifth try of the game. The Yellow Jackets found a way to punch one in, but failed to score on the two-point conversation as the Bobcats headed into the half with a comfortable 28-4 cushion.

Although the Bobcats controlled the first half, they struggled to set a dominant tone throughout much of the second half. Helgerson and Roskopf each scored their second tries on the day as the Bobcats took a 38-8 lead with just over 20 minutes remaining. This lead would be short lived as AIC went on to score four consecutives tries while holding the Bobcats scoreless.

Head coach Becky Carlson touched on her players’ level of intensity in the second half.

“I certainly wish they would’ve had the same motivation in the first half for the entire game, but I believe there was a level of complacency that was achieved four or five minutes into the second half,” Carlson said. “When AIC started to put some points on the board, they really didn’t answer back, which is really uncharacteristic of them. I think it was an all-around lack of effort.”

The Bobcats suffered a loss midway through the second half when Helgerson was aggressively thrown down. The junior was forced to remain on the sidelines as a result of her neck injury and would ultimately shift much of Quinnipiac’s momentum.

“Whenever one of our players goes out, we always have another player that is completely capable of filling that gap,” Carlson said. “Karee is obviously a very big defensive threat for us in the middle of the field, but when someone goes out, that shouldn’t affect the way we play.”

The Bobcats had one minute to defend their 38-34 lead as time ran out. AIC could not break through Quinnipiac’s defensive line as the Bobcats would hold on to their two point lead for the win.

Carlson was noted the team’s ability to fight through a late comeback from the Yellow Jackets.

“This is the kind of thing that we need,” Carlson said. “This is a little bit of a wake-up call going right into the playoffs.”

Myles saw an area of improvement for the Bobcat’s after the close call in the final moments.

“We’re going to be able to watch this game film and really be able to hone in on the little details that are going to push us through the finals,” Myles said.

The Bobcats improved their record to 7-1 and will travel to Maryland to take on Penn State next Saturday before they defend their title in the NIRA Tournament.