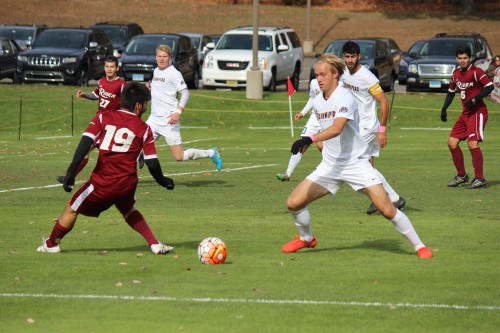 Quinnipiac men’s soccer came up short in its final regular season home game losing 3-1 to the Rider University Broncs on Saturday at the QU Soccer Field. 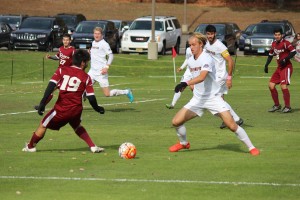 Despite the Bobcats’ recent success, the loss snaps a seven game win streak dating back to a 3-2 win over Marist on Oct. 1.

Quinnipiac struck first on a goal by sophomore forward Rashawn Dally. The shot went past Rider goalkeeper Ryan Baird just 8:22 into the first half and found the back of the net for his third goal of the season.

The early goal was exactly what Quinnipiac wanted, but a first half goal from the opposition would follow.

With 15:02 into the first half, Broncs’ senior back Rob Nardiello scored his third of the season. Nardiello was able to gain possession after a free kick and made no mistake finding twine off of the rebound.

Despite back-and-forth play for the next while, Rider would convert for its second consecutive goal just 10 minutes before the end of the first half.

Broncs junior forward Jose Aguinaga placed a penalty kick past freshman goalkeeper Chrys Iakovidis, off the right post, and into the net for his fourth of the season.

Although the first half was partially successful, head coach Eric Da Costa knew his team needed to give more.

“At halftime we just talked about putting the first half behind us,” Da Costa said. “I thought we did a lot of really good things in the first half [but] just try to get back to playing soccer and try to get that second goal.”

Unfortunately for the Bobcats, they would not find that second goal.

The Quinnipiac attack showed relentless pressure in its offensive zone, but was not able to finish the job.

With just seven minutes left of play freshman back Arthur Herpreck shot the dagger for his second goal of the season and a commanding two-goal lead.

The persistent effort is one Da Costa commends, but at the end of the day, the Bobcats put themselves in a hole after giving up two goals.

“Our objective was to minimize chances, which we did we hit our objectives, but it’s an unfortunate goal to give up,” Da Costa said. “When you give a creative offensive team a two-goal lead, you’re certainly going to have an uphill climb.”

Quinnipiac could have clinched the Metro Atlantic Athletic Conference (MAAC) with a win against Rider, but instead will face Fairfield on the road this Wednesday with another opportunity to do so.

“We still have a great opportunity going into Fairfield,” Da Costa said. “Obviously the challenges are a bit more now than they were coming into the game, but we’ve dealt with challenges all year and we’ll try to face those challenges.”

Finishing No. 1 in the MAAC would give the Bobcats home-field advantage going into the playoffs, but Da Costa added that no matter where his team plays, they will be ready.

“If you look at our results, home and away, they’ve been pretty similar. We’ve won on the road, we’ve lost at home, we’ve lost on the road so, I don’t really think this team cares where we go,” Da Costa said. “Wherever we have to play we’ll play. We want to play here because it means that we won the regular season championship and that is a goal of ours and we continue to pursue it.”