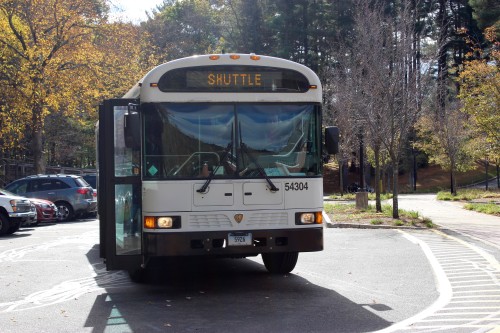 The shuttle systems at Quinnipiac impact the lives of many students who live on campus. The shuttle schedules have changed slightly, according to Parking and Transportation Coordinator Shanon Grasso.

Grasso said students can find the updated shuttle schedules on their MyQ accounts on the Quinnipiac website that is posted in the shuttle stop huts and outside her office by Public Safety.

The latest change featured in the orange line includes a shuttle going from Westwoods to South lot. From there a separate shuttle will go to Whitney Village and return to South lot instead of going to all three destinations in one loop, according to Grasso.

Grasso also encouraged students to use the TransLoc app, which can track the shuttles in real time as they go through their routes.

Grasso said she receives complaints from students through many channels and welcomes them. That way she can improve the shuttle systems at Quinnipiac.

“I definitely have an open door policy,” Grasso said. “If you feel something could be done a better way, I’m all ears to listen to it. I’m not using the shuttle service everyday, so you guys are the experts when it comes to that, if something can be tweaked to make it better.”

Sophomore Megan Mikutsky recently had trouble with the shuttle system when her and her friends went to see a movie on a Tuesday night.

The group came back to campus to find there were no parking spots in the Hill Top lot, so she would have to park on York Hill, but shuttles had stopped running for the night. There was no way for them to get back to main campus, according to Mikutsky.

Grasso said the shuttles run until 1 a.m. on weekdays and until 3 a.m. on Thursday, Friday and Saturday nights, for the students’ convenience.

“I have no problem with sophomores parking in North Lot after the shuttles have stopped running, but they have to move their car before 7 a.m.,” Grasso said. “At 7 a.m., I have people ticketing.”

Mikutsky believes the school should have a shuttle on call for students who can’t make the regular cut off times for the shuttles to stop running.

“If there’s nowhere to park, where we are supposed to? That’s the only other place we can go,” Mikutsky said. “They should provide some kind of transportation back down [to main campus].”

Dennis Lyons, senior director of contract services at DATTCO has had a very positive relationship with Quinnipiac, throughout the years of supplying buses to the school.

“The team here at DATTCO is committed to providing a level of service that the Quinnipiac community can enjoy safely, comfortable and reliably” Lyons said. “We welcome the input of anybody that uses the system and are always open to changes that help us to meet this commitment.”

Lyons is committed to adjusting the shuttle schedules, improving the tracking abilities and maintaining the safety of Quinnipiac students on their shuttle buses.

“I’ve never had a bad experience on the shuttle itself,” sophomore Aimee Trottier said. “It’s always just waiting for it, but the shuttle drivers are wicked nice and funny. I know that if you’re trying to go anywhere besides York Hill, the shuttles are so unreliable. I’ve been stranded at Target before but you just call Public Safety.”

“Students love to complain about stuff, but I think it’s not actually as bad as we think it is,” Trottier said.

“I feel like they could add more to it, just so you’re not waiting for an hour at a time just at York Hill to get down [to main campus],” Jaglia said.

Grasso wishes students would utilize the shuttle system more often, to alleviate parking overflow for students who live on campus.

“Most kids from York Hill try to drive down here before the commuters, and there is nowhere to park anymore because they keep driving down,” Dupree said.

Dupree believes adding more buses and making them more reliable and strict to their schedules would improve the shuttle system greatly, so more students would utilize them.

Grasso asserts that although she has a tough position, she works her hardest to keep Quinnipiac students happy.

“It’s a big job, and I’m kind of by myself, so I’m doing the best that I can to keep up with everything. But when someone is with me, on the phone or in person, you have my undivided attention,” she said. 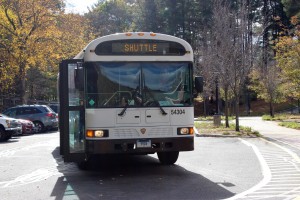