‘Misrepresentation of Muslims in the media’ 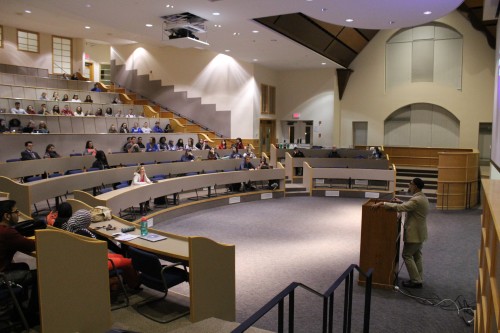 On Monday, Oct. 23,the Muslim Student Association at Quinnipiac hosted an event in which the Director of Muslim Life at Yale University Omer Bajwa delivered a lecture entitled “The Misrepresentation of Muslims in the Media” in the Mount Carmel Auditorium.

Bajwa began the evening by asking the audience, “what thoughts and images come to mind when you hear the words ‘Islam’ and ‘Muslim?’”

“The Quran,” “brotherhood,” “head scarfs,” and “tradition” were a few of the responses, while one Muslim student chimed in with “me.”

After receiving those answers, Bajwa said that based on his research over a 16 year span, most of the images people think of when they think of Muslims and Islam are for example, 9/11, suicide bombers and Osama Bin Laden, all of which Bajwa referenced on his PowerPoint.

“I think it’s also a generational thing in that you were a generation that came of age really in the shadow of 9/11,” Bajwa said. “That has a lot to do with perhaps what your perceptions may be.”

The content of the lecture was based off of Bajwa’s master level research about this topic that he compiled at Cornell University. He began the research pre 9/11, continued through 9/11 and finished the project post 9/11. Bajwa used all of his research to develop a presentation about how Muslim men and women are represented incorrectly within the media.

“We live in a world where we are surrounded by it, in fact I might even argue, bombarded by images with the nature of social media,” Bajwa said.

One of the photos that Bajwa showed during his presentation was in reference to the black flag of the Islamic State of Iraq and Levant (ISIL) that was screenshotted from an ISIL propaganda video. He then asserted his opposition towards the terrorist group.

The purpose behind sharing these photos was to prove that each of these depictions of Muslim people can be found on public media sources.

“This is what people are consuming,” Bajwa said. “That is the main thing that I want people to take away. This is what you and I are being exposed to consciously…and all of these images are going to leave impressions on you.”

Junior Kayla Kirton agrees that our country seems to try and twist narratives to fit it’s own agenda.

“If you were treat any other minority in this way, someone would call it out,” Kirton said. “But just because it’s about Muslim, an ethnicity that is being vilified in the public mind, doesn’t make it okay when it’s not.”

Bajwa said watching TV shows that having high crime rates executed by people of color completely warps people’s perceptions of those people and their ideas about what is realistically happening out in the world.

He also talked about a report done by Jack Shaheen, who developed the idea of the “three-B syndrome,” where in the media, Muslims are always portrayed as either bombers, belly dancers or billionaires. Shaheen did an exhaustive study that proved that out of 900 films that came out since Tom Edison’s film “Inception,” less than 5 percent of those films actually had positive portrayals of Muslim characters.

Another example of misrepresentation of Muslims in the media that Bajwa provided was the movie “Zero Dark Thirty”, a film about the capturing and killing of Osama Bin Laden. He said there are many holes in that film.

“Of all the people that watch “Zero Dark Thirty”, most of those people think that’s how it went down,” Bajwa said. “That film, not even ambiguously, it straight up implies that waterboarding and torturing of one of the suspects…electrifying people’s genitalia and things like that led to information intel that led us to capture of Osama Bin Laden. There is no definitive evidence that that’s come out.”

Those are just a few of the many examples that the Directory of Muslim Life provided for the audience about how Muslims are misrepresented in America.

Southern Connecticut State University sophomore Kulsoom Farid, said this was something that needed to be done.

“Honestly it was surprising to see a Muslim man stand in front of the majority of students not being Muslim and saying his opinion so straightforward,” Farid said. “If it was a Christian man or someone of a different culture saying this information, it would be different. It would be more acceptable.”

Bajwa ended the presentation by pushing the idea of education, engaging in dialogue, resisting abuse of power and promoting peace.