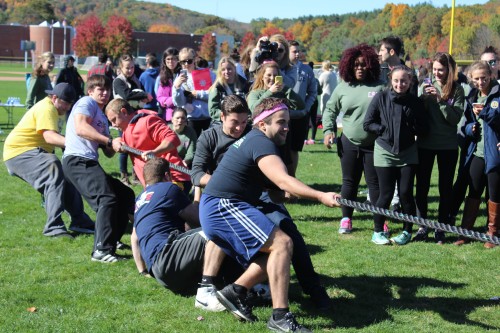 Members of Pi Kappa Phi compete in the tug of war tie breaker.

The newest sorority at Quinnipiac University, Gamma Phi Beta, had their first philanthropy event, GPhi Boot Camp, on Sunday, Oct. 23. Members of the community gathered to take part in activities including an egg toss and a tire flip, all for a common cause. Proceeds from the event went to benefit the sorority’s philanthropy, Building Strong Girls.

Clubs and organizations that were represented at the event included Greek Life, the New Blue Rugby team, an ice hockey intramural team, Residential Life and the Student Programming Board.

Although it is hard to have a goal for their first event in terms of participation and or how much money to raise, Gamma Phi Beta did want to bridge the gap between Greek Life and other student organizations, according to Gamma Phi Beta’s president Hannah Blockis.

“All of the organizations who have been here have been nothing but supportive, incredibly helpful, incredibly enthusiastic, and it just really shows me how incredible our Greek community is here at Quinnipiac and how supportive they are,” Blockis said.

Vice President of Public Relations for Gamma Phi Beta Kaitlyn DeBardelaben said everyone was excited because this was the sorority’s first event.

Gamma Phi Beta’s philanthropic partner, Girls on the Run, will be receiving the majority of proceeds from the event. Members of FIJI reigned supreme, earning first place at GPhi Bootcamp. Part of the proceeds raised at the bootcamp will be donated to FIJI’s philanthropy according to the sorority’s Philanthropy Chairwoman Ally Foltiny.

Girls on the Run inspires girls to be joyful, healthy and confident using a fun, experience-based curriculum which creatively integrates running, according to the organization’s website.

Foltiny said all the games are simple but can get competitive.

“They get fun when everyone is working together,” Foltiny said.

Blockis said Gamma Phi Beta wanted to mix every aspect of strength together, from working as a team to working individually.

“There are events that are fine and gross motor skills, events that are mind game-based, events that are speed and endurance-based,” Blockis said. “I think we were able to build a beautiful group of events to outline the core values and the goals that we were trying to reach.”

“We’ve had girls volunteer to be trainers, we’ve had girls volunteer at the actual races, you could paint faces, you could do whatever,” Blockis said. “But the coolest thing about it is that you’re not training the girls to go out on these runs and making sure they could do a 5K. Each training that they do is based off of a certain value. It brings everyone together as a community as well as training them physically and getting them ready for the race.”

In some ways, Girls on the Run’s activities mirror what GPhi Boot Camp was all about.

“Some of the [stations] are more physical than others,” Foltiny said. “Some of them require a little bit more strategy which is really great because as a chapter that’s what we’re doing. We want to focus on building mental and physical resiliency in girls.”

Gamma Phi Beta members were not allowed to participate in the events, but they were active in encouraging the participants.

Every sign for each activity listed a statistic about girl’s mental health, body image or roles in society. The purpose of displaying these statistics was to make participants stronger mentally, as well as to spread awareness, according to Foltiny.

“Army crawl says how seven out of 10 girls want to change aspect of their body. For the egg toss, we looked at it more as more of strategy, like how fast you throw it, so we used girls are more likely to develop a mental illness at a younger age than guys are,’” Foltiny said.

Members of the Pi Kappa Phi fraternity attended the event to support Gamma Phi Beta. President of Pi Kappa Phi Andrew Stengel said he and his brothers had lots of fun at the sorority’s first event.

Gamma Phi Beta member and senior Olivia Hilton oversaw the tire flip event. Hilton was pleased with what she witnessed.

“We had so many awesome teams come through. Even though sometimes it felt like the guys had a leg up, the girls really pushed through and really gave it their all which is awesome,” Hilton said. “That kind of coincides with our philanthropy of building strong women. We got a lot of people riled up and cheering us on so it was a really awesome time.”

After a successful first event, Foltiny was extremely grateful.

“I really appreciate everybody coming out and supporting our philanthropy and our chapter,” Foltiny said.