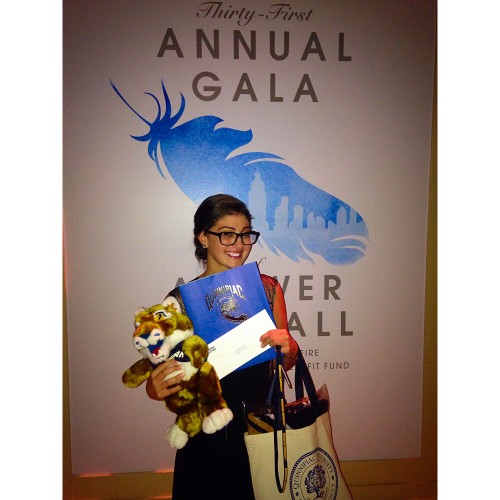 Daniella Giammona became the first member of the class of 2021 at a benefit honoring her late father.

Imagine an early acceptance to your dream school in front of a huge crowd of people. That is what New Yorker Daniella Giammona experienced on Saturday, Oct. 22.

Giammona said she was surprised when Kanicka Ingram, senior associate director of admissions and director of multicultural recruitment, announced her acceptance into Quinnipiac. Giammona was the first student accepted into the class of 2021, according to Ingram.

“When I finished my speech and Kanicka [Ingram] came on stage I was so confused,” she said. “I didn’t know who she was or why I was still on stage, but as soon as she started talking I started crying.”

The mission of Answer the Call, founded by Rusty Staub, is to support the families of New York City police officers, firefighters, Port Authority Police and EMS personnel who have been killed in the line of duty, according to the Answer the Call website.

Giammona’s father was a New York firefighter who passed away on 9/11 doing what he loved, according to Ingram. As the daughter of a fallen responder, Giammona said she was asked to speak at the annual gala. She spoke about how Answer the Call has helped her and her family move forward.

“Even though it was very difficult for me to speak about my dad at the gala, it meant so much to me to actually do it,” she said. “I know my dad would tell me how proud he is of me for doing what I did that night. Speaking in front of all those people was one of the most difficult things I’ve had to do, and I know he was there with me pushing me to do my best.”

Director of Development at the New York Police & Fire Widows’ and Children’s Benefit Fund Lauren Profeta contacted the Office of Undergraduate Admissions at Quinnipiac to ask if Quinnipiac University would attend the event to surprise Giammona with her acceptance, said Ingram.

Giammona said that she applied to Quinnipiac early decision and is coming into the school undecided, although she is leaning towards a major in education or counseling.

“Quinnipiac was my first choice because as soon as I stepped on campus I saw myself going there. It had everything that I wanted out of a school,” she said.

Although she knew she wanted to attend Quinnipiac, it was not an easy process for her to be accepted into the university. Giammona said her grades freshman and sophomore years of high school were not what she had hoped for.

“One major obstacle I had to overcome was myself,” she said. “As I started to think about college I had a reality check that I needed to work a lot harder to get into a school that’s right for me. When I found Quinnipiac I really pushed myself all through junior year to get where I needed to be for Quinnipiac. I worked very hard to get to where I am now.”

Giammona said she will bring her school spirit and willingness to learn to Quinnipiac in the fall.

“I’m mostly excited to meet other students who attend Quinnipiac,” she said. “I have a few friends who graduated already, and they told me the one thing that made their experience unforgettable were the people they met.”

Giammona had a strong application, according to Ingram.

“She’s a bright young lady who has challenged herself inside the classroom,” Ingram said.  Not only has she taken her academics seriously, but she’s involved in her school and home community as well. All qualities we look for when reviewing applications for admissions. I enjoyed reading her application.”

Ingram expects Giammona excel in the classroom, be a leader on campus and to continue her important work with The New York Police & Fire Widows’ and Children’s Benefit Fund.

“I’m humbled to be able to make such an impact in the lives of our youth as they begin their next chapter in life,” Ingram said. “This is true not only for Daniella but for the 1,900 freshmen that step on our campus every year.”