Rugby looks to repeat as national champions with playoffs approaching 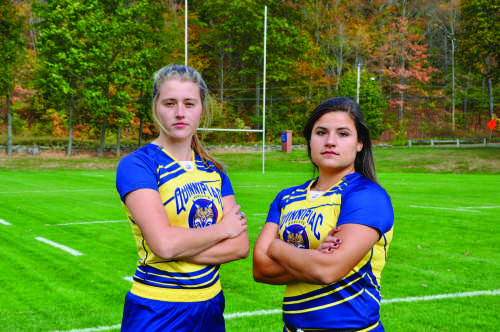 A small white banner hangs on the wall of Quinnipiac rugby coach Becky Carlson’s office inside the Mount Carmel Campus Recreation Center. It is a National Championship banner from last season to celebrate the Bobcats bringing home the first national title in program history. However, instead of saying 2015 National Champions, the white banner displays the year 2016. 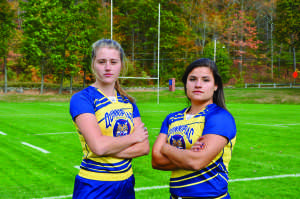 “It was a misprint,” Carlson said. “They were going to get rid of it, so I told them I’d just take it.”

Instead of being tossed away as an unfortunate typo, Carlson and her squad can look up to the banner as a source of motivation. The flag serves as a constant reminder of their unwavering goal to repeat as national champions and to keep the crown in Hamden.

Through the first five games of the season, the Bobcats played like defending champs, sprinting out to a 5-0 record while outscoring their opponents 247-34. The Bobcats’ attack has been balanced all season, highlighted by a 77-7 win against Brown in which six different players scored the first six tries of the match. In their 64-3 win against Norwich earlier in the year, nine different players recorded successful tries for the Bobcats.

The throttling of Brown was not just the Bobcats’ fifth win of the season, but their 11th in a row overall dating back to last year’s championship run. However, a major test for win number 12 loomed in the form of a Central Washington team that had beaten Quinnipiac in 2015, just before the Bobcats rattled off their 11 straight victories.

Quinnipiac traveled across the country to a rain-soaked Washington field and battled in a tight physical matchup, but came up short, losing 19-12 despite shutting out the Wildcats in the second half. While many would consider this a deflating loss, the Bobcats see the Oct. 15 outcome in a completely different light.

“Don’t apologize for us losing that game,” junior National Intercollegiate Rugby Association (NIRA) All-American Flora Poole said, whose early try put the Bobcats on the board in the loss. “I came off that game and wanted to play them again tomorrow. We played such a great game but knew we weren’t at our best either. I had so much excitement to play them again.”

Senior Taylor Schussler would also have wanted a rematch.

“Given the opportunity to play them again in the next few hours after that game, any one of us on the team would have been ready to go again,” Schussler, who recorded two tries in the win against Brown, said. “That’s the level of confidence we have in each other to perform and fix our mistakes.”

No matter the sport, there have been championship teams who have experienced “tough” losses, only to later point to that game as a valuable learning experience to propel them to perform even better. The Bobcats feel this situation is no different.

“There was a certain buzz around the team when we won the championship last year,” Poole said. “I hadn’t felt that buzz again until that Central Washington game, which excites me. The last time I felt that, we won a National Championship.”

Whatever buzz Poole felt after the game must have carried over to their last match against Castleton, which Quinnipiac won by a landslide 213-0 margin. Poole recorded two tries and five assists in the blowout to get the Bobcats back in the win column as they look to begin a new winning streak. While the Central Washington loss has propelled the team to move on and return to its winning ways, the players still have revenge on their minds for a potential playoff rematch against their new cross-country nemesis.

“Central Washington is our rival now,” Schussler said. “Going through them for the most important title that you can have would be absolutely storybook for sure.”

Poole echoes Schussler’s sentiment. While another championship is the ultimate goal, going through the the team that has been their Achilles’ heel the past two years would be a welcomed outcome for the Bobcats.

“Winning another championship would be pretty cool, but I want to see us play fearless and play a game to our fullest potential,” Poole said. “I feel like another game against Central Washington would most likely be where that would come out.”

“I don’t care who’s in [the tournament],” she said, as she pointed to the National Championship trophy proudly displayed beside her desk. “I want to get that back and make sure that stays here.”

Regardless of whether the Bobcats are hoping for a rematch with the Wildcats in this year’s tournament, they can be certain that the rest of the field will be gunning to take down the defending champs, and not just because they have the coveted trophy, according to Carlson.

“Even if we were the third-place team, people would still be gunning to take us down. Because of the history that we’ve had in becoming a National Champion, every team will be looking to beat us,” Carlson said. “It’s taken other teams a decade to climb the ladder the way we have, in starting with a team with no experience and just a couple of recruits to becoming champions. People play us with a different fire because they want to beat us and make a point to us.”

If their opponents come with a different fire come tournament time, physical preparation certainly won’t be an issue. They are a second half team that gets better as the game goes on and are notorious for wearing out the opposition.

“We pride ourselves on our fitness,” Poole said. “Our strength and our speed just comes out in the second half.”

With that strength and speed comes vicious defense as well from the Bobcats. The team has only allowed five points in the second half all season.

“There’s nothing better than five minutes before the first half ends and you can see the other teams with their hands on their knees,” Carlson said.

Schussler also notices a rise in confidence when the team returns to the field for the second half.

“Not having to worry about our level of strength dropping in the second half opens up so many opportunities for us to turn it on and run the score up,” she said. “We don’t need to catch our breath. Instead we can focus on what details we need to fix in the second half.”

The Bobcats will have their Senior Day at Southington High School against American International College on Saturday before beginning their title defense in the NIRA Tournament. It will be a moment of reflection and emotion for Poole and the Bobcats, who will help honor their seniors before the regular season finale.

“Each senior has brought something different to the team,” Poole said. “We will miss them dearly, but they have taught us so much and have passed it down to the freshmen who have just got here, and also the juniors and sophomores.”

However, there is still unfinished business for the seniors and the rest of the Bobcats. Reflection will quickly turn into preparation as the tournament will open on Nov. 12, and the title defense will officially begin.

As for that small white banner that hangs in coach Carlson’s office, Schussler has her own take on the misprint.

“Well, in about a month, it won’t be wrong anymore,” Schussler said.

Perhaps instead of a printing error, the banner in Carlson’s office is a portrait of what is to come for the Bobcats.