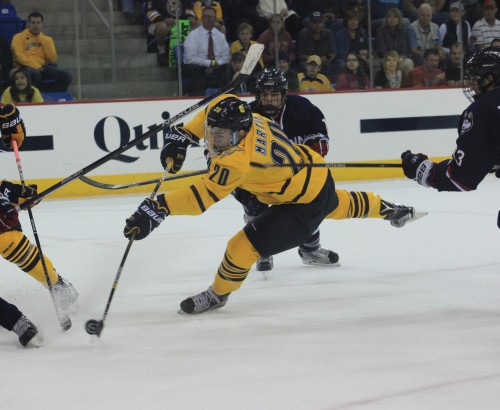 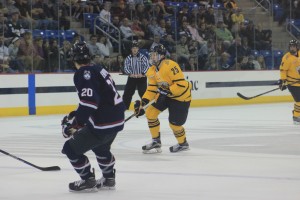 “That’s how we’re gonna win this year. We’re going to have to find ways and I thought we did that,” head coach Rand Pecknold said. “We’ve got good players, and I thought we really played to our identity tonight and got rewarded for that.”

Quinnipiac opened the scoring on a point shot from forward Andrew Taverner, one of 19 first period shots for the team.

The Bobcats looked to be firing on all cylinders until defenseman Chase Priskie was hit from behind just seconds after the goal. The hitter, UConn forward and St. Louis Blues prospect Maxim Letunov, received a major penalty, disqualification and one-game suspension on the play.

As a result of the hit, Priskie did not return to the game, leaving Pecknold the task of juggling lines in order to compensate for the loss at the back end. Luke Shiplo moved back to his natural position at defense and freshman Alex Whelan played on three different lines due to the injury.

“You don’t expect [to lose guys], but Luke [Shiplo] has been great,” Pecknold said. “We have eight good defensemen, and we found a way to get Luke in and it certainly was a luxury to have him tonight.”

Despite the shift in line combinations, Craig Martin was able to bury a bar-down goal for Quinnipiac with 25 seconds left in the opening frame. Martin’s goal was his second in as many games, a testament of his ability to stay in the Bobcats’ lineup this season after struggling to find time in the prior season. 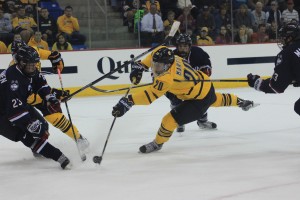 “Craig [Martin] was in a tough spot where we were really good and really deep,” Pecknold said. “He’s a very good hockey player, and that’s why we started the year putting him up with Tim Clifton up on that top line.”

The second period began with a Huskies goal from forward Spencer Naas, who was able to find the puck in a scramble after Quinnipiac goalie Chris Truehl made two desperation saves.

Luckily for the Bobcats, just two minutes later forward Thomas Aldworth tucked in a wraparound goal for his second of the season to extend the lead to 3-1.

The game continued to go back and forth as UConn forward Karl El-Mir made use of a deflection in front and potted his first of the season. The Huskies’ persistent effort earned praise from their head coach Mike Cavanaugh.

“I really do think our guys competed hard and gave it everything they can,” Cavanaugh said. “I think I can look every one of our guys in the eye tonight and tell them they left it all out there.”

Despite the Huskies’ hard work, a 3-2 deficit would be the closest they would come to winning this game.

Freshman Brogan Rafferty scored his first collegiate goal on a highlight reel, five-hole move to bring the Bobcats ahead by a score of 4-2. Rafferty’s slick goal was a surprise for some as he deked out goalie Adam Huska, but Rafferty said he’s been practicing those moves for a while.

“[It comes from] just messing around in the backyard all these years I guess,” Rafferty said. “He’s a big goalie, really good goalie, so I knew I had to get him moving left to right and put it on the ice.”

The celebrations continued just one minute later when Connor Clifton scored on a rocket of a wrist shot for his first of the season on the power play.

Quinnipiac added seven of its 43 shots in the third period, while holding UConn to 31 in the entire game. 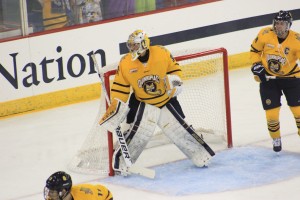 Truehl, who dazzled with a few stretches after not starting in the game prior against Maine, stopped 29 of those shots. Despite the changes in goal, Pecknold believes his team will succeed regardless of who is between the pipes.

Next up, the Bobcats will travel to Agganis Arena on Saturday for a matchup against No. 8 Boston University in hopes of continuing their recent success.