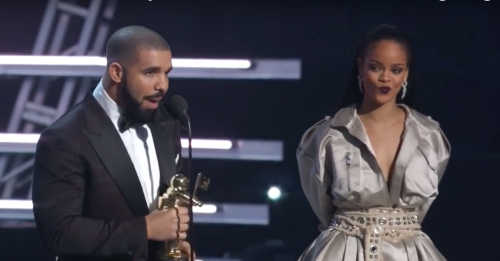 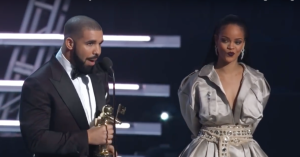 First Brangelina and now Drake and Rihanna? What is the world coming to? We can’t take much more of this! It feels like yesterday that Drake stood up at the Video Music Awards (VMAs) and presented Rihanna with the Michael Jackson Video Vanguard Award. His speech brought girls at home to tears.

“She’s someone I’ve been in love with since I was 22 years old,” Drake said during his speech at the VMAs. “She’s one of my best friends in the world.” Cue the sobs, tissues and thoughts of “I can’t even get a text back.”

The couple is reportedly now seeing other people, according to E! News. It’s bad enough they broke up, but now they’ve already moved on? Give our hearts a break.

“They are not exclusive anymore,” a source told E!. “They still love each other, but their schedules have gotten in the way.”

They seemed perfect together, a love story in Hollywood that could last and would last forever. Dreams are now crushed and hearts are shattered.

Seeing the information for the first time on an unreliable Twitter source late on Oct. 10, I thought, “Oh good, there’s a chance this isn’t true. There’s still hope.”

All hope was lost, however, when I found the story to be true. Right now, it seems like there’s no chance for the two to get back together, which makes me want to cry.