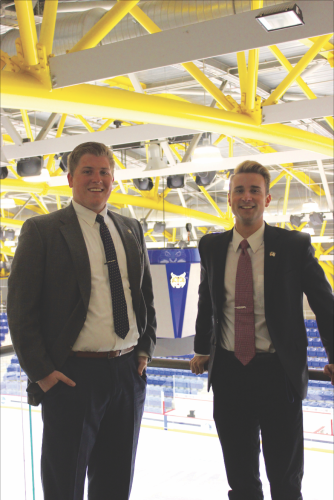 It sounds simple in theory, but as time progresses, putting enthusiastic effort into both working hard and easing up can become difficult to maintain.

But for the duo “Brosh and Clouts,” as they call themselves, it seems fairly easy – almost too easy. 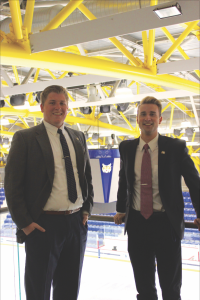 Senior journalism majors Tyler “Brosh” Brosious and Justin “Clouts” Cloutier are a near perfect combo when it comes to sports broadcasting for the Quinnipiac Bobcats Sports Network (QBSN). Brosious offers the quick and witty call on play-by-play while Cloutier complements with meaningful and entertaining color commentary.

While the pair shows seamless symmetry on-air, the chemistry begins outside the booth as best friends. But it wasn’t always that way.

The real life interactions began over a game of Madden NFL and some smack talk from Cloutier’s end. This led to conversation about their roommate struggles and before long, Brosious invited Cloutier to live in his Village suite. The guys were the only two broadcast journalism majors in the room and from then on they  clicked.

From sophomore social media pals in 2014 to third-year roommates today, the two have come a long way in their friendship, but even further since the beginning of their collegiate broadcasting careers.

“One day [Graduate Assistant] Nolan Rich reached out to me because he heard I did some play-by-play in high school and needed some people in athletics,” Brosious said. “I did one play-by-play with him and I was like, ‘That was cool but let me see if I can bring my buddy Justin.’ So I called him one day and he was like, ‘Yeah, let’s do it.’”

Although the friendship may not have been anywhere near where it stands today, it didn’t take much for the two to find synergy through broadcasting.

“Athletics had only two play-by-play announcers at the time and we knew how cool it was, so we jumped right on the bandwagon and it’s been fun ever since,” Brosious said. “We started then and now we’ve done probably every sport at least once.”

From ice hockey to softball to field hockey and back again; you name it, they’ve covered it. Considering how many non-traditional sports teams play for Quinnipiac, the duo has tackled the difficult task and always with a touch of humor.

“In the booth, we just have great back-and-forth. There was a field hockey game we were doing and there wasn’t a goal for a whole half, so we were just going back and forth and making jokes off each other,” Cloutier said. “It keeps it light and makes it fun. That’s what I enjoy about it.”

While it may seem like fun and games at first, it is quite the contrary in reality. The two have grinded extremely hard and as a result, work on campus for Quinnipiac Athletics.

One of the people to recognize the pair’s hard work over hilarity is their current boss at Quinnipiac Athletics, Sports Information Director Ken Sweeten. When asked about the two, he didn’t flinch at the chance to commend all they have done.

“Justin and Tyler have a great relationship together – I can’t imagine another situation more rewarding than working in sports with your best friend,” Sweeten said via email. “Those two guys get it. They’re good at what they do and they have fun doing it, which is important in any line of work. I’ve enjoyed having them on-board and I’m excited to see what’s in store for Bobcats Weekly this year.”

The pair gets a much different side of the Associate Athletic Director than most, and Cloutier says Sweeten is someone who has shaped their growth.

“The thing with Ken is that he gets a lot of bad rep from journalism students and even teachers which he shouldn’t get, because one, he’s a great guy and two, he’s just busy,” Cloutier said. “When we contacted him, we just started talking to him like we hang out with him, like he’s one of the guys. Obviously he’s our boss, but at the same time we like him. He’s a nice guy.”

“I think it’s a relationship that I’m lucky to have. I’ve said numerous times Ken’s been a great mentor and a father figure here and you need those at school,” Brosious added. “People get so scared of him. He’s a normal human being, normal guy, just treat him like a person.”

In addition to the relationships they have built, the duo have even earned internships to go along with their student media and Athletics work. Brosious is an intern writer at Barstool and Cloutier is a freelance social media manager at “The Maury Show.”

“[The internships are] a testament to how hard we work,” Cloutier said. “We want to get our voices heard and I think with me at Maury and Brosh at Barstool… he doesn’t get that job unless he’s chatting with [lead writer at Barstool Sports Philly, Adam Smith], I don’t get my job if I don’t speak my mind, we don’t do well with athletics if we don’t talk to Ken and bring our ideas forward.”

On top of the imposing extracurricular jobs they have, Brosious and Cloutier fail to leave their roots as they continue to contribute and serve as experienced members of the QBSN.

“Their work ethic is second to none,” Chairman of QBSN Connor Fortier said. “If there’s anything that needs to be filled in last second, or an article to be written or a game to be covered, at least one of them will step up and do it.”

While their work through QBSN and Quinnipiac Athletics has earned the duo admiration from the student media community, their newest and most exciting project at Quinnipiac is coming soon.

Brosious and Cloutier will have feature roles in the newest season of “Bobcats Weekly,” the first weekly highlight show produced by Quinnipiac Athletics and Quinnipiac’s School of Communication. 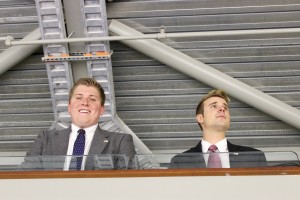 “It’s going to be another highlight show like last year, me and John Orsenigo, we’re basically going to host the show,” Cloutier said. “Nicole Kessler is going to do interviews and Brosh and I are going to write it.”

The two didn’t waltz their way into this great opportunity either; they beat out other aspiring applicants throughout tryouts by writing a two-page script of exactly what they had in mind.

“There’s other kids that may have been a little more talented on-air than myself, but nobody’s taking the time to spend 90 minutes or two hours on a full-blown plan,” Brosious said. “[Cloutier has] the talent. He’s great at what he does. He’s great on-air and I’m a great writer. That’s why we are a good yin-yang and there’s times where he and I will both just outwork people.”

While it may be sad for some to see them leave the Hamden area, the two agree that it’s their time.

“Two years ago, I never thought I’d be in this place now. I feel really comfortable where I’m at in terms of leaving because I think the school has provided me with all of the resources I need to get to the next level and get a job once I leave this place,” Cloutier said. “I’m just excited for the future, for [Brosious’] future because he’s gonna kill it — so proud of everything he’s done — we’re gonna have fun. It’s gonna be a fun life, it is.”