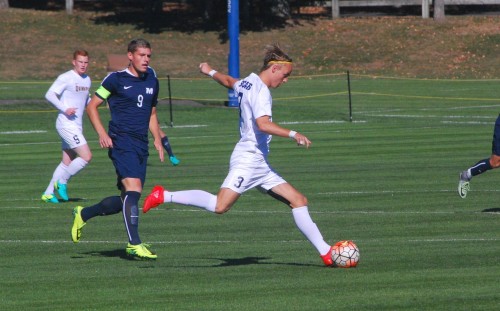 Quinnipiac men’s soccer earned its fifth-straight MAAC win Saturday afternoon by defeating Monmouth 3-1 at the QU Soccer Field. The win marked the first time the Bobcats have defeated the Hawks since the 2004 season. 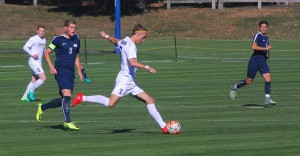 “For us it’s not about the past, it’s about where we are at right now” head coach Eric Da Costa said. “Coming in 4-1 in the MAAC and opening up a gap against a team that’s right on our heels is important for us. We want to continue to push to get into a position to be in the playoffs and once we’ve done that, then hopefully we can contend for a regular season championship.”

Early in the first half, senior Ryan Scheiderman took control of the ball after a risky slide tackle and crossed it to freshman Eamon Whelan, who scored on a diving header for his eighth goal of the season.

The Bobcats had another scoring opportunity soon after as junior Shaquille Huggins ripped one from beyond the penalty box that would be saved by the Monmouth goalie.

Minutes later, Whelan found himself involved another scoring opportunity as he crossed it back to Huggins, who narrowly missed it in front of the goal.

The Bobcats eventually found a way to put another point on the board as senior James Doig punched one in on a penalty kick with 11 minutes remaining in the first half.

Scheiderman attributed the Bobcat’s 2-0 lead after the first half to his team’s positively and mental toughness.

“Everybody listens and everybody is on board,” Scheiderman said. “There’s no questions asked. If we have to be somewhere, name a time and place and we’re there 10 minutes before. Just the little things and I’m talking off the field too. The young guys have taken their responsibilities and we’ve told them what they need to do and they’re doing their jobs.”

Early in the second half, Huggins earned himself a yellow card for a hard collision with a Monmouth defender. Freshman Conor McCoy had a crucial save in front of the net after freshman goalkeeper Chrys Iakovidis was forced to step out to defend a Monmouth attacker. Iakovidis, who had six saves on the day, let in his only goal off a penalty kick from Monmouth’s David Nigro with just over thirteen minutes remaining.

Tensions quickly flared as freshman Evan Hughes quickly earned the Bobcats third yellow card on the game after questionable dive by Monmouth’s Asiedu. Matthew Tyler sealed the deal for the Bobcats as he scored his second goal of the year on a free kick from 25 yards out, putting Quinnipiac up 3-1.

“We got banged up pretty good today which was something we didn’t anticipate,” Da Costa said.

Quinnipiac was whistled for 11 fouls and awarded three yellow cards on the day, while Monmouth had only nine fouls and one card.

The Bobcats will search for their sixth straight MAAC win as they host Siena on Wednesday at 4 p.m.