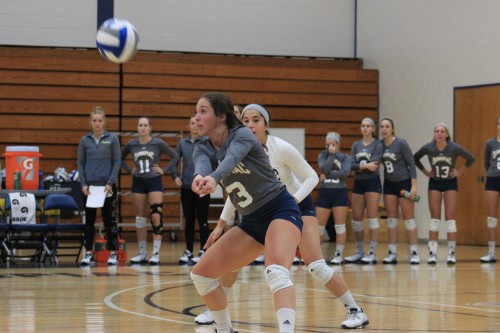 Quinnipiac women’s volleyball defeated Marist in five sets on Saturday at Burt Kahn Court to tie the Red Foxes for second in the MAAC standings. 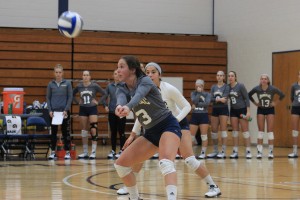 Marist came into the match riding a four-game win streak with a one-game lead over the Bobcats.

Head coach Kris Czaplinski regards the match as the most important win the program has ever had.

“Every win that we go forward with is going to be the most important one now,” Czaplinski said. “But this one was huge because Marist is so talented and we’ve never beaten them before so another record is broken there.”

The Bobcats got off to a slow start as Marist won the first set 25-21.

“We came out with low energy,” sophomore Elizabeth Kloos said. “It was a close game though so we knew that they weren’t better than us, we just did a couple things wrong. So that was helpful to go into the next game knowing that it was our errors and not them being better than us.”

The Bobcats won a long second set 27-25, but Marist would answer back with an extended set win of its own, taking the third set 28-26.

Down two sets to one, the Bobcats bounced back in the fourth set with a 25-20 win.

Sophomore Kat Miller sealed the victory for the Bobcats with a spike set up by freshman Maria Pansari to win the fifth set 17-15.

“It was phenomenal, especially for Kat to put the ball away the way she did,” sophomore Claire Knust said of Miller’s game-winning kill. “It was the feeling of no mercy and really giving them no other opportunity.”

Knust made her Quinnipiac debut in Saturday’s match, returning from an injury to earn seven kills and a .316 hitting percentage.

“It was a little nerve-wracking but once I got out there, the girls made it so easy to fit in just the way that they are with their chemistry, the intensity that they were bringing and their effort,” Knust said. “It was just so easy to step on the floor with them.”

Knust was initially recruited as a middle hitter but is now playing the outside for the Bobcats.

“What [Knust] is able to do is absolutely amazing,” Czaplinksi said. “She just brings a completely different dimension that Marist wasn’t ready for.”

Pansari was instrumental to the Bobcats’ victory, amassing 46 assists and 2 kills as well as a 1.000 hitting percentage. With 861 assists, the freshman is on pace to become Quinnipiac’s first player to reach 1,000 assists in a season at the Division I level.

“The bench was the difference maker today,” Czaplinski said. “They came into tight situations and they performed perfectly and that’s hard to ask.”

With Saturday’s victory, the Bobcats advance to 15-7 overall with a 7-2 record in the MAAC.

Czaplinski looks forward to the future of his team.

“We’re a very young team,” he said after Saturday’s victory. “It’s kind of scary what this team is capable of doing.”