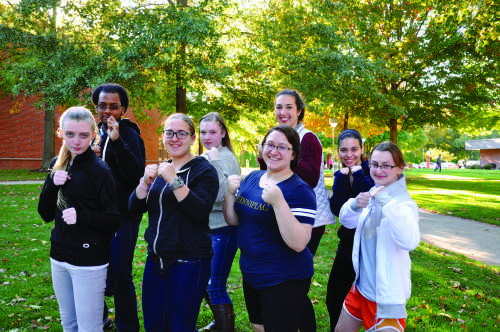 The Mixed Martial Arts (MMA) Club at Quinnipiac, which came to campus on Sept. 18, is much more than a club that meets on Sundays. 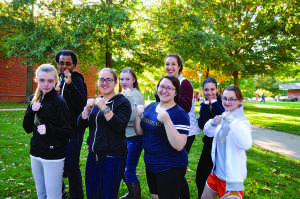 Although the club is called ‘Mixed Martial Arts,’ it is not a traditional MMA club. Tovah Williamson, sophomore biomedical science major and Shaylah Zorn, sophomore sociology major, the president and secretary respectively, said the club is called MMA to show that they are inclusive of other styles and all levels of ability.

“Not only are we inclusive of different styles, but we are also inclusive to many different body types. We wish to reduce the stigma surrounding Mixed Martial Arts, as it is our belief that one does not need to have a specific body type to participate,” Williamson said.

Williamson took an interest in martial arts when she was six years old and earned her black belt in Tae Kwon Do at the age of 13.

“It was just something I started at a young age because I preferred martial arts to dancing and still wanted to do an activity after school. I also felt weak and small, so I wanted to learn something that helped me feel more in control and proud of who I was,” she said.

Zorn took an interest in martial arts because of Williamson, and the two workout together daily at the gym.

The club initially attracted 85 members, although on average there are five to core members who meet in Studio A in The Mount Carmel Campus Fitness and Recreation enter on Sundays from a.m. to 11 a.m.

Instructor and adviser Marvin Jones teaches the club Tae Kwon Do, which is Korea’s national sport, and he also teaches Tae Kwon Do and kickboxing classes on campus for credit.

Do, and students with experience can practice their skills in the style they are accustomed to. Jones and Williamson wish to take the club in the direction of competing in intercollegiate tournaments, although they are currently not allowed to.

Williamson said the MMA club is a great way to get involved and meet people with similar interests, and it is also a rewarding workout.

“An advantage of attending this club is that it will not only enhance your skills, but will also provide a regular workout that is more invigorating than just going to the gym,” she said.

Williamson explained that the club promotes a healthy body as well as a healthy mindset. The beliefs of Tae Kwon Do are courtesy, integrity, perseverance, self- control and indomitable spirit, so those who practice are also striving to bring balance and harmony to their lives physically and mentally.

“We ensure that people will succeed in this club as long as they have the right mindset,” Williamson said.

Williamson also said that diversity is an integral part of martial arts because those who practice Tae Kwon Do value individuality. Just as no two bodies are physically the same, no two minds are either, so it is important to recognize and appreciate each other’s differences.

“Diversity is valued in our club because the three main people that started the club – Shaylah, MJ, and myself – hope for a future where people are not judged, and I think martial arts is the perfect activity to allow for people of all ethnicities, backgrounds and body types to come together and do something fun in a safe environment,” Williamson said.