The professor with a spark 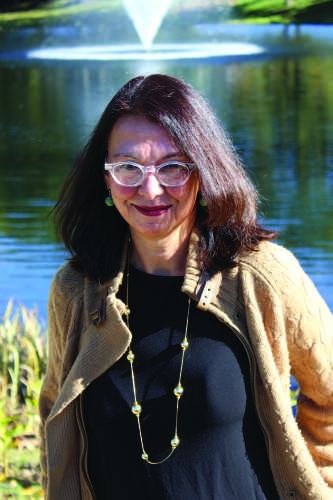 Six years ago an English professor, who was friends with her husband, asked Professor Engelsgaard to come work at Quinnipiac University. By that time, she had already had a life many would only dream of. Engelsgaard is originally from Santa Cruz, California where she went to college at University of California, Santa Cruz. 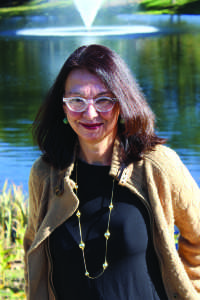 It was there that her mother instilled in her the idea of getting a job that most college students her age are reluctant about.

An affirmative action law had just passed, forcing fire departments to hire women. Being the strong feminist she was, Engelsgaard was drawn toward the idea of being one of the first woman firefighters in the United States.

“It’s kind of crazy…I was a surfer girl and during the winter I was out there in the waves, in the water and in the summer just sweating and fighting these fires,” Engelsgaard said.

Being a wildland firefighter at just 18 years old, Engelsgaard fought fires outside of Sequoia National Park. She shared stories about getting picked up by helicopters, getting dropped off in remote areas with not enough food and sleeping on a rock for several nights.

Working for the California Department of Forestry led Engelsgaard to appreciate the life she lived, as well as the lives of all living things.

“I’ve always been fascinated with nature and environmental issues,” Engelsgaard said while reflecting on her Native American heritage that considers nature equal with animals and people.

However, it wasn’t just the heat of the flames and the struggles she endured that caused Engelsgaard to have a profound life-altering moment. It was working beside convicts as an 18-year-old woman firefighter and trusting them with her life.

“It was the first time I really had any exposure to anyone in prison,” Engelsgaard said. “I fought fires side by side with these guys, and I had to really depend on these guys who were in prison for things like murder and rape and some pretty serious crimes.”

any of the men, she had to completely trust them because of the dangerous line of work they were both in. “I really had to go into it with the belief that we would work together as a team,” Engelsgaard said.

The more time she spent with these men, the more they opened up and shared horrible stories about how they got where they were in life. She began to think more about the value of life, especially the effect of one’s adolescent experiences on the rest of his life.

“The things that happened to you at that time during your life will really influence, profoundly, the rest of your life,” Engelsgaard said. “It will give you direction or something to think about, something to promote inquiry about anything.”

For the professor, being a wildland firefighter for three seasons has transitioned her life to where it is today, with the basis of inquiry and respect for human life at the core of everything she does.

“Professor Engelsgaard always wants the best for her students, she was always willing to write recommendations for former and current students and always offered to help us out with our resumes in any way she could prepare us for future interviews and potential jobs,” Raphaelson said.

The spirit of Quinnipiac is alive in her mind, and she is constantly thriving off of the students’ performances both in and out the classroom.

Engelsgaard eyes light up talking about how interesting she finds each of her students. She makes sure to note the “spark of learning” that thrives here at Quinnipiac, extending the theme of being a firefighter to the academic world as well.

“I think every single life is so interesting, and that’s what I love about teaching because I think that my students work and their ideas and what they write and their research is honestly more amazing than what’s being published by professionals,” Engelsgaard said.

Engelsgaard remembers all of her students, which may sound shocking to some, but she a professor whose ultimate goal is to see her students succeed.

Engelsgaard’s own college experience at the University of California, Santa Cruz played a vital role in the kind of professor she is today. Even though she went to an esteemed college, the dedication she received from her professors was not stabilizing for a young mind, as she was trying everything she could to succeed and learn about the world.

She would have famous professors who would be too busy publishing works and traveling around the world giving talks to spend the proper amount of time that their education- thirsty students needed.

“I always wanted to teach,” Engelsgaard said. “I took what I learned from my good professors, but I also learned from my professors who were not so good and did not give me that support, so I decided that I would not become one of those professors.”

Dedication to her profession has allowed Engelsgaard to teach all over the country and abroad, even being a professor at an elite private school in Mexico City where she taught the president of the country’s son.

Being half Mexican-American and Latina, Professor Engelsgaard has taught classes on global cultures, teaching to and learning from her

students about her heritage. She keeps the Native American mentality that life is all symbiotic, both physically and spiritually, in the back of her mind when she teaches. Also, teaching in Connecticut has also allowed her to become open to another side of Latino culture that was so different from being in California.

“I learned a lot about Latino culture here in the Northeast from [the students],” Engelsgaard said. “Kind of like being an outsider in your own culture…It was really interesting for me.”

As a professor, she thinks of more than grades and nameless faces when she steps into the classroom. Engelsgaard commits the time and energy necessary to make each and every one of her students succeed, and she is perplexed by professors who wouldn’t do the same.

“I try to get them to really chase their dreams and their goals. For me it’s nothing to write them a letter if I can make a huge difference to them in the future,” Engelsgaard said.

Engelsgaard is constantly influenced by her students, praising this generation for the ability they have to make a difference in society.

“There’s going to be a huge shift in culture and the economy,” Engelsgaard said. “Your generation is really thinking differently already and you don’t even realize it.”

But maybe this difference is due to people such as Professor Engelsgaard herself, who takes the time to dedicate their lives to making the next generation even better. There is nothing this passionate professor won’t do to see this vision become reality.

“To see the results of your efforts and your teaching evolve and see these students achieve whatever their goals are,” Engelsgaard said. “That is better than any kind of paycheck, any kind of award you can get.”

A reassuring comment by a professor that goes above and beyond the norm.