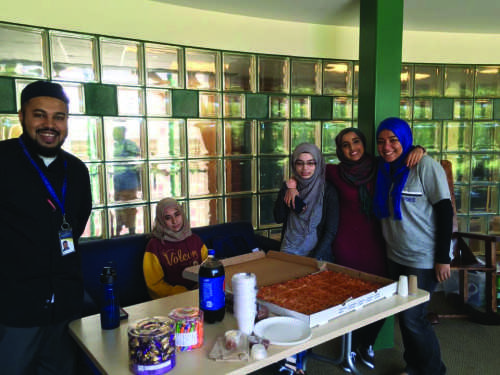 Imam Sami Abdul Aziz has filled his dream position of Muslim chaplain at Quin- nipiac University. For Aziz, his position as chaplain is rooted in passion.

“I have a passion for chaplain work,” Aziz said in an email. “I have always been involved in giving back my whole life and this is an extension of that desire to give back, support the community and grow in my faith journey.”

When the position opening was posted and shared by the Association of Muslim chaplains, Aziz applied and ultimately was accepted. He has been Chaplain since 2013.

As Muslim chaplain at Quinnipiac, Aziz is responsible for guiding, helping and as- sisting the Muslim community on campus to grow in spirituality and fellowship.

“I guide them to be better citizens through their faith tradition,” Aziz said. “Islam encourages charity of every kind.”

Aziz is on campus five to seven hours a week. He attends the Muslim Students As- sociation (MSA) meetings, organizes and attends events, leads prayers and counsels students.

“Imam Sami is very dedicated to working closely with the Muslim students on campus,” Galal said in an email. “He is friendly, personable and willing to help stu- dents however he can. He also assists us by coming up with new ideas for MSA events and ways we can engage the Quinnipiac community.”

Aziz said all chaplains are religious facilitators. His title is Imam Sami Abdul Aziz. He said all university chaplains use religious specific titles such as rabbi, father or reverend.

Aziz is also responsible for creating interfaith bonds across campus. He plans to speak at the upcoming Black Lives Matter vigil.

The Muslim chaplain has also been able to build relationships within the Muslim community at Quinnipiac, and even outside of it. He meets periodically with the MSA board.

Vice President of MSA Ali Munshi said previous Muslim chaplains have not been as involved with the group as Aziz has been.

“Sami is just incredible. He comes to every meeting,” Munshi said. “He’s like a counselor, which is awesome. You can talk to him about anything.”

Aziz has also attended other events on campus including Stand and Speak and A Place at the Table. According to Aziz, he was exposed to insight into campus life and social justice through these events.

Aziz does not only do work within the Muslim community. He works with the Jew- ish, Catholic and Protestant chaplains to create and grow interfaith understanding through conversation and different events. Aziz said the chaplains are planning to join together to host events this year.

In addition, Aziz is planning to have talks on Islam 101, ISIS and Islamophobia.

“We ask him a lot about what we think about the different topics that we want to present to the student body because, as you know, Muslims in America is a very hot topic right now, especially with the election that’s going on,” Munshi said. “It’s great to have a secondary source to go to and say, ‘Hey, is this okay?’ It’s fun to talk to him.”

Misrepresentation of Muslims in the Media is one event of note coming up. On Mon- day, Oct. 24 from 7-9 p.m. in the Mount Carmel Auditorium, Yale University’s Director of Muslim Life Omer Bajwa will be giving a lecture about the misrepresentations of Muslims that are portrayed in the media, according to the event’s Facebook page. After the lecture, there will be a question and answer session and a free dinner, all presented by the Quinnipiac MSA.

Omer Bajwa is a close friend and mentor of Aziz’s.

Outside of Quinnipiac, Aziz holds many different positions. He is the director and founder of the Common Ground Institute and Services, which is an institute dedicated to making peace through education, according to Aziz. He speaks on Islam, ISIS, Islamophobia, Jesus, Moses and anything else in relation to Islam. Aziz travels to churches, libraries and schools all over the Northeast.

Aziz is also Imam at the Bloomfield Muslim Community Center, as well as the Muslim chaplain at Wesleyan University. Imam Sami even tries to intermingle Wes- leyan Muslim students with Quinnipiac Muslim students.

“He invites Wesleyan students over and says, ‘Hey, come down and come hike with these guys or come to their ice cream social,’” Munshi said. “Sort of intermingling and university mingling. He’s helped a lot in that aspect, in terms of getting us more organized and knowing more about each and more about our faith.”

He also just began his doctorate of ministry at Hartford Seminary.

“My motivation is manifold, but basically it is rooted in the Quran and the life of Prophet Muhammad, peace be upon him, Prophet Jesus and Prophet Moses, all of whom tell us to spread peace,” Aziz said. “Chaplains spread peace and bring hearts together.”