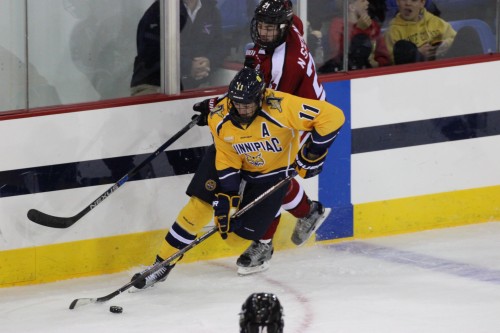 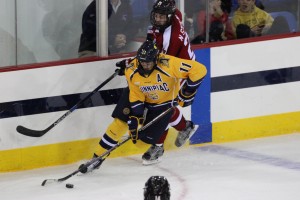 “We’re excited to get the win tonight,” head coach Rand Pecknold said. “I thought we battled a lot harder tonight than we did last night. I thought we cleaned some things up, still not perfect — it’s game two of the year, but we’ll get better.”

Just two minutes later, freshman Karlis Cukste intercepted a pass in the slot and found the back of the net for his first collegiate goal, giving Quinnipiac a 2-0 lead. He showed great emotion after an unforgettable moment in his career.

“I was in front of the net, so I shot and I scored,” Cukste said. “It was awesome. I don’t think there is another word to describe it.”

Although the Bobcats’ offense was front and center in the first, on the defensive side of things, Quinnipiac managed to kill off all three of its first period penalties.

In total, the two teams took 24 penalties over the course of this game, something Pecknold had a fairly good idea of prior to the new season.

“The phrase the referees are using is they’re ‘reclaiming the rulebook,’” Pecknold said. “We’ve been told that, certainly saw it tonight and need to adapt… that’s why the power plays are so high.”

In one of those power plays, Tim Clifton backhanded his first goal of the season on a frenzy out front to put the Bobcats up 3-0.

“Just kind of chaos, to be honest with you,” Tim Clifton said, breaking down the play. “But that’s how I score most of my goals anyway, so figure why not just throw it to the net and hope something happens.”

Shortly after the 3-0 goal, Northeastern’s Adam Gaudette capitalized on 4-on-4 play and capped off the second period by cutting Quinnipiac’s lead to 3-1 on a goal scored off of a juicy rebound in the slot.

Like the period before, the penalties kept coming in the third period. Eleven total penalties were handed out in the final frame of play, but no odder moment would occur than what happened with just over 15 minutes left in the game. 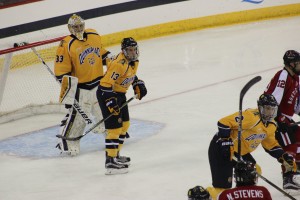 At the tail end of a Bobcat penalty kill, Chase Priskie broke up a play in his own zone, proceeded to skate his way to a breakaway, flashed a silky move and finished it all off with a goal to extend Quinnipiac’s lead to 4-1.

The catch to this play? Priskie began the play shorthanded, but finished the scoring opportunity just as time expired on the Bobcats power play.

The goal technically counted as a power-play goal, but all in all, the Bobcats would convert on just 2 of 8 man advantage opportunities.

“I think a lot of times we panic out there. We have a new group,” Tim Clifton said. “We’ll get flowing, we need time to just start feeling each other out and sensing where each other will be.”

Huskies forward Zach Aston-Reese batted a puck out of mid-air and into the net to cut the lead to 4-2 late in the game, but it would not be enough.

With just under two minutes to play, Scott Davidson lifted a puck to Tim Clifton, who scored the Bobcats’ fifth goal of the game on an empty net to solidify the win for Quinnipiac.

Although the Bobcats outscored their opponent, they were outshot 34-28. A large part of Quinnipiac’s victory is due to its hard-nosed character, which included 24 blocked shots.

“When you have a group of guys who want to win, they’ll do anything for the greater good of the team,” Tim Clifton added. “Tonight is a perfect example of the boys selling themselves for the win.”