When Webkinz took over 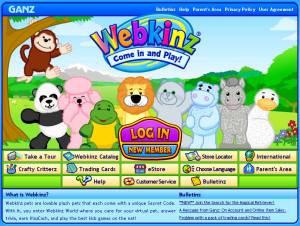 Shopkins are taking over the children toy’s market. This reminds me of the time when Webkinz were the toy to have. They have faded out since their release in 2005 by the Canadian company Ganz. Similar to average plush toys, Webkinz started out as a range of small stuffed animals, but they also connected the child to the “Webkinz World” website through a secret code attached to their tag. In years following the release, Webkinz became a huge hit. I was 10 years old when the toy became popular at my school. At that age, stuffed animals had started to fade out and toys like Barbies and Legos were much more popular. Webkinz changed the game for the traditional stuffed animal. From the code on their tag, you are able to create an account on the website “Webkinz World,” a virtual reality in which you can play as the stuffed animal you own. The code on the toy not only meant you could add that animal on your list of pets to play but they also came with a unique prize to add to your home.

Designing a virtual house was one of my personal favorites. By playing games you could earn coins and use those coins to buy things in the game. From accessories for the animal to furniture for your house, coins were an essential. Games like the Wheel of Wow and Wishing Well were daily games where you could win more coins or accessories for your house. Those games would be the first things I would play when I logged onto the game. Younger me always hoped to win the jackpot because when you’re 10, you don’t understand that computer games are rigged.

Webkinz were more than just toys, they were a competition between friends. Having the most Webkinz in elementary school meant you were the “cool” kid. Everyone in school would envy you and plead their parents to buy them more. I remember for my birthday my mom picked me up from school and drove me to the local toy store. We waited on a line outside the store to grab the latest Webkinz. The thought of waiting on a line for a stuffed animal when I already had so many seems ridiculous now, but I wasn’t the only one. “Webkinz World” was my first online addiction. Before Pinterest, Facebook and Instagram, I went on “Webkinz World” every day after school. I was too young to care about online shopping but I did care about buying stuff for my virtual Webkinz. It was an addiction and those who had the toys can understand the rush of logging in a new pet and telling all your friends about what you have.

Were Webkinz good for our generation? I can’t say. I had fun playing them and a part of me misses that time of my life. They definitely started competition and feelings of jealousy between my friends and me at such a young age, but it was all in good fun, well for most of us.