Lately, the tech center has been getting more student inquiries than the typical freshman problems of setting up Microsoft Office and printing, according to a senior and staff member of the tech center, Melanie Nyarko. 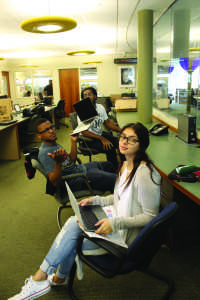 The newest email update and unreliable Wi-Fi connection are causing students to be stressed out.

It’s annoying if you have to take a quiz online and it just buffers or logs you out,” senior Nina Vricella said.  “It’s tough.”

Quinnipiac has decided, in accordance with its agreement with Microsoft, to provide the QU community with an updated version of the Outlook email system. This update is the Office 365, according to Nyarko.

After Quinnipiac University’s email upgrade, students like junior Khristiana Samake have been having trouble logging onto their Quinnipiac email.

Samake said she off campus and wanted to check her email on her phone. Her email did not open up.

“I was shocked,” Samake said. “I tried re-signing in. It was going through, but in a way, it wasn’t reloading the recent emails I was supposed to get.”

Samake was disappointed since she could not check what professors had emailed her back.

Samake is not the only one experiencing these issues. A lot of students have been going into the tech center and asking for help signing into their updated email.

Since Quinnipiac had to release the update, it was tested over the summer with just the technological staff. Once the school year started, the email update was given to the rest of the students, according to Nyarko.

However, with Quinnipiac’s 7,500 undergraduate student body, the immediate release to all students was not the best option, according to Nyarko.

“It might have rolled out too big,” Nyarko said. “The server could not handle all of it.”

“The system was tested extensively with our staff as well as a student pilot group with very positive results and in general the upgrade went well,” Tarca said.

Nyarko said that many of these issues can be fixed by changing the settings on a phone or computer but students may not know how to resolve this on their own.

The tech center is currently trying to roll the update to the student population in smaller chunks. By the end of October, the updated email should be available to all students.

“So if your account hasn’t updated yet, it will,” Nyarko said. “If it has and you can’t get in, just come to the tech center.”

Another technological issue that has come up for students is Wi-Fi connection loss.

Vricella loses Wi-Fi randomly and gets charged for data usage.

“The Wi-Fi has gotten better over the years, but it still needs some tweaking,” Vricella said. “It goes in and out and you’ll have service in one place and you’ll lose it in another.”

Nyarko said this happens because the Wi-Fi routers are in the buildings and if a student is walking around, especially going to the College of Arts and Sciences (CAS), it is unlikely that the student will stick with the connection all the way through.

Tarca says that several factors contribute to this loss of connection outside of academic buildings.

“It could be due to factors such as density (number of individuals [on] the Quad especially the first few weeks of classes) all trying to access a carryover signal; condition or version of the end user’s device type; and even weather conditions.”

“The goal is just to have pretty much consistent Wi-Fi throughout the campus,” Nyarko said. “If you stand on the Quad for awhile, it will pick up the Wi-Fi again. It might drop, but it will pick it up.”

However, Vricella said she mainly loses connection in her building, Eastview Residence Hall.

Vricella is not sure why the Wi-Fi has been crashing, but believes one possible reason is because of the bigger student population.

The growing student population has been a big concern, especially with all the new freshmen. It makes the Wi-Fi slow or disappear.

“The server can handle only so many people,” Nyarko said. “They are working on making it bigger to hold more people.”

Tarca encourages to resolve any issues they are facing.

“If there are any students still experiencing an issue they should immediately visit the Tech Centers located on the Hamden and North Haven campuses,” Tarca said.