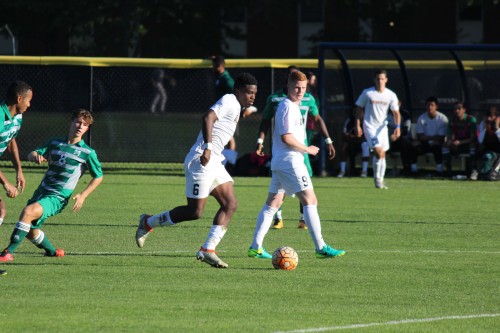 The men’s soccer team eclipsed its single-game high scoring mark for the second straight time, tallying four goals on its way to a 4-0 win over the Manhattan Jaspers on Wednesday. 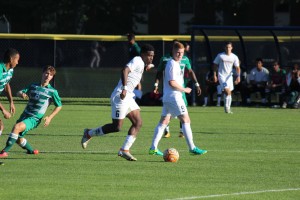 The four-goal performance comes less than a week after its three-goal overtime win over Marist, which was previously the team’s highest scoring match of the season.

Two goals came from the team’s leading goal scorer, freshman Eamon Whelan, who also netted the overtime winner against Marist. It is Whelan’s second multi-goal game of the season.

The Jaspers, seeking to snap their four-game losing streak and earn their first conference victory, came out strong to start the match and dominated possession during the opening minutes of the first half.

Momentum seemed to swing to the Bobcats after freshman defender Connor McCoy blocked away a scoring chance from Jaspers freshman Ajani Phillips, immediately resulting in a golden scoring chance for the Bobcats. However, a shot by Whelan at the open net rang off the goalpost.

The field remained slanted towards the Manhattan goal for the remainder of the first half. Minutes after Whelan’s shot struck the post, sophomore Rashawn Dally had a scoring chance in front, only to be turned away by a sliding save by Jaspers goalkeeper Connor Hayes.

The match remained scoreless until the Jaspers committed a foul inside their own box with 22 minutes remaining in the first half, resulting in a penalty kick for the Bobcats. Senior Ryan Scheiderman beat Hayes on the PK for the goal, giving the Bobcats the one-goal cushion.

The Bobcats threatened again minutes later, when senior James Doig centered a beautiful free kick, but the header in front once again struck the post.

The second half began much like the first half ended, with the Bobcats on consistently on the attack. The offense had numerous scoring chances but couldn’t finish, mostly pushing its lead passes too far and missing a streaking teammate.

Finally, after another lead pass went too far, Dally collected the errant pass and sent the ball to the center of the net, where a waiting Whelan headed in his sixth goal of the season. With a 2-0 lead, the Quinnipiac offense erupted.

Five minute later, sophomore Colton Grob fired a deep shot on goal, and Whelan was there once again to deflect it past Hayes for his second goal of the game.

With the air seemingly taken out of the Jaspers sails, the Bobcats capitalized on lackadaisical defense when senior Liam O’Sullivan sent a dump-in pass to junior William Pustari, who had blown by the Manhattan defense. Pustari kneed a high-arching shot over Hayes to give the Bobcats their third goal of the second half.

The three-goal outburst in the second half was gratefully welcomed by the Bobcats, who have been unable to cash in on several scoring chances this season, including the first half of this match.

“You start to sit there and think déjà vu all over again,” Bobcats coach Eric Da Costa said. “[The goals] came a little later than we expected… but teams have to be able to overcome those early setbacks and put a team away late… in the end I think the result was fair.”

On the other side of the field, freshman goalkeeper Chrysostomos Iakovidis had a lax day in net for the Bobcats, only needing to convert three saves, all coming in the second half.

The Bobcats are back on the road for a Saturday matchup against Canisius, while Manhattan returns home to meet Saint Peter’s.