Confident in his own skin 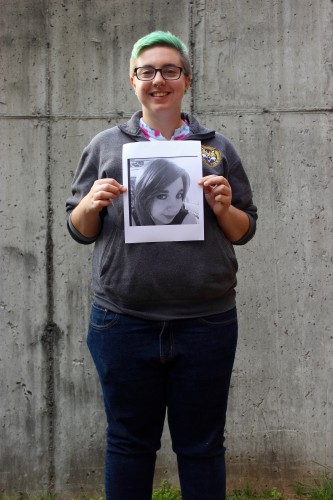 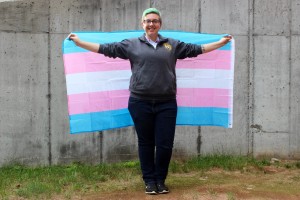 Theo Pinnow, previously known as Margaret Pinnow, walks up with teal, spiked hair, nose piercings, a baggy flannel and a confident aura. He is a transgender student at Quinnipiac University and he is himself.

He made the choice to go through the transition to male at the beginning of his collegiate career.

One out of five theater majors, Pinnow has found the confidence through acting and supportive relationships to speak out about his transition to male.

He started a GoFundMe page on his Facebook and Twitter accounts to raise money for hormones that will kickstart the next phase of his transition. People have been donating an average of 10 dollars, according to Pinnow.

“I put the [GoFundMe page] up last week and I have a goal of $2,000 for now,” he said. “The money is for hormones and I have raised a little over $1,000 so far. The fact that someone is willing to take their 10 dollars instead of going to see a movie, they were willing to donate to me. It means a lot, as someone who doesn’t have a lot of money right now either. I know how tough it is for a college student to afford anything.” 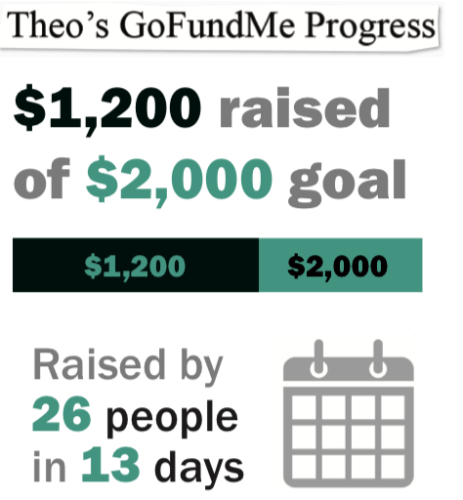 The hormones will help make Pinnow more outwardly masculine. The way his body stores fat and muscle will change, and over the course of a couple months, he will have a more masculine physique. The hormones also stimulate hair growth, and his voice will drop, according to Pinnow.

Transgenders who are transitioning to male usually start the process by wearing a chest binder. It’s similar to a sports bra, but its main purpose is to make the person’s chest as flat as possible, according to Pinnow. He wears one just about every day.

At some point during the transitional process, hormone replacement therapy (HRT) will start. HRT is the process of taking testosterone so the body will appear more physically male. It can taken by injection, a topical gel, a patch or in the form of a pill, like they have for birth control, according to Pinnow.

Pinnow said after taking hormones, most people eventually get top surgery, a voluntary double-mastectomy and reconstructive surgery to make their chest look as similar to someone who’s biologically male.

“It’s expensive, but the surgery is life-changing,” he said. “It’s basically puberty all over again, but it’s going the other way, I’m excited to see what happens. Maybe someday I’ll have a beard, which would be really weird.”

After he hits his $2,000 fundraising goal, Pinnow plans on keeping the GoFundMe page around. Someday he hopes to save enough money for his surgery.

“I know some people cannot donate right now, but they may want to help the cause later; it’s not going anywhere,” Pinnow said.

Pinnow chose the name Theo because he wanted something uncommon.

“I was trying to see what other people changed their names to and a lot of people pick a more normal name, like Aaron, but they would spell it really weird,” he said. “Theo was a nickname for Theodore, and I do not like the name Theodore but I like the shorter nickname, and I literally just found it on a whim. I enjoy it.”

Pinnow’s theater advisor, Kevin Daly, originally helped him kickstart his fundraising journey. Daly helped draft an email and provided the other theater majors with some information about what was going on.

“I made [the email] so it wasn’t an awkward thing; it was more like, ‘You can talk to me about it, you can ask me questions,’” Pinnow said. “It is new and weird and people are learning new habits and people still screw up my name all the time, and they get really angry and upset with themselves. I say, ‘Calm down, it’s a habit, it’s hard to break.’ I’ve been lucky. Theater is a very supportive environment and we have a lot of fun.” 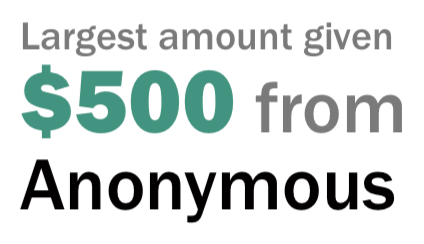 Over the past four years, Pinnow has become one of the leaders within the theater program. He mentors underclassmen, directs shows, writes plays, leads lighting crews and is currently designing the lights for the two fall mainstage productions. He is the first student to ever take on this role in a mainstage production, according to Daly. He’s honed his focus into the areas of directing and lighting.

“I’ve tried to be supportive to Theo the way I would want a faculty member to be supportive of my own son, by listening, responding positively, being available and encouraging our theater community to do the same.”

Daly has watched Pinnow grow as a person throughout his years at Quinnipiac. He remembers how enthusiastic and eager Pinnow was to learn new aspects of theater. He argues that Pinnow has pushed him more than he has pushed Pinnow.

“It takes courage to do what Theo’s doing,” Daly said. “Nobody likes change. We’re all scared of it. But change is important. Especially when it can lead to a better quality of life.”

In an effort to educate others about his story, Pinnow spoke in the first-ever Story Slam on Friday, Sept. 30 in the Black Box Theater. Story Slam is projected to be a continuing series run by students in the future. Eight students told quick personal anecdotes on the theme, “Coming Out.”

He spoke about the first time he bought pants from the men’s department of Old Navy.

“I kinda came out of the closet twice; I thought I was gay at first and then realized, I’m actually a transguy instead, surprise,” Pinnow said at Story Slam. “Part of coming out and being true to yourself, involved getting a whole new wardrobe. [Buying pants] was the coolest thing I could do, I thought maybe it would help me feel more masculine. I have humongous hips and girls pants were just not working out.” 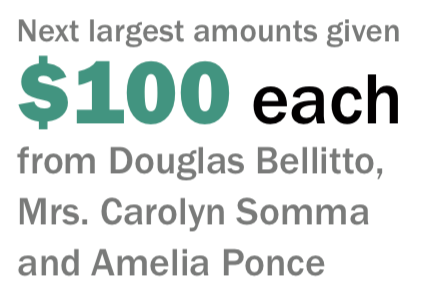 Pinnow told how weird he felt to be going in the men’s department rather than the women’s.

“I walk in the door and immediately don’t move. ‘I usually go to the right, that’s where all the chic stuff is, but I want to go to the left and people are going to be really weird because I kind of look like a girl,’” Pinnow said. “I got to the big wall of jeans and realized I didn’t how men’s sizing worked, because chicks with their jeans, you have to know what time of year it is, cast a spell and summon the demon and maybe the jeans will fit.”

Pinnow goes on to say that he picked four different sizes and finally found a pair that fit after trying them on in the dressing room.

“There’s this really great epiphany moment when the image you see in the mirror matches what you feel you are in your head. I had this humongous feeling of relief because I looked like the person who has been in my head for five years and I’m like, ‘Dude, it’s just a pair of pants.”

He bought five pairs of pants.

“As soon as I’m done, I find the bathroom in the mall, I change into a pair of jeans and walk around with this big stupid smile on my face. I never realized that owning a pair of jeans from the guy’s section would be the coolest thing ever, but it was.”

Pinnow said he does not always feel comfortable in the environment that is Quinnipiac. The discussion and implementation of gender neutral bathrooms has started sweeping the country and although Quinnipiac has not hopped on that bandwagon quite yet, it is something that would make Pinnow feel more comfortable and it is something he would love to see on this campus.

“It’s definitely something I think the school could invest in,” he said. “When I first came out, I was like, ‘Yeah, I’m not going to worry about bathrooms, it’s no big deal.’ My first day on campus I’m like, ‘Oh actually, that’s something I do have to worry about.’ Physically I look a lot more female still so I’m sticking with those bathrooms to avoid anything awkward, but it would be really nice to have the single stall bathrooms where anyone can just go use it and I don’t have to worry about making anyone else uncomfortable.”

As far as the progression of the LGBTQ community on campus and nationally, Pinnow sees a slow but positive progression.

“It’s a slow but well-moving battle. I think in a lot of places it has gotten a lot better,” he said. “Personally, on campus, I am not uncomfortable, but I am not completely comfortable either. It really depends on who I am around. Everything is in the right direction.”

The support and acceptance from Pinnow’s friends have continuously overwhelmed him throughout the entire process.

Emma Griffiths is one of Pinnow’s closest friends. They became extremely close when they met freshman year of college. Pinnow was the assistant director of a show that Griffiths was acting in.

“I’m sticking by his side,” Griffiths said. “I have a lot of friends who have come out as trans, so I have learned that it’s really important to just try to be supportive and available to talk about whatever needs talking about. Theo is an awesome guy, and I’m really glad that he’s taking steps toward being the guy he is inside.”

Pinnow was planning on waiting until after graduation to start the process until an internship coworker encouraged him to go for it.

“I never thought I would [transition] while I was still in school; I thought I would just bear through it and you know, ‘I’ll be uncomfortable, but it’ll be less stress,” he said. “I did my summer internship and I told someone that I was going to come out and they were like, ‘That’s really cool, you don’t have to wait you know, you should just go for it,’ and I thought, ‘Maybe I should,’ and I got a big confidence boost this summer. I was like, ‘Let’s do it. Why not? It’s worth it.’ So I did.” 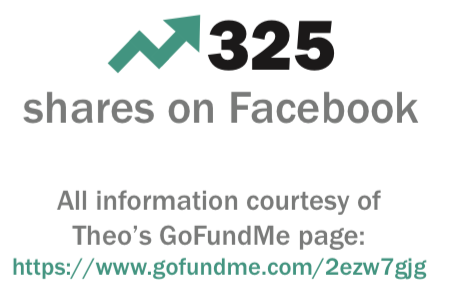