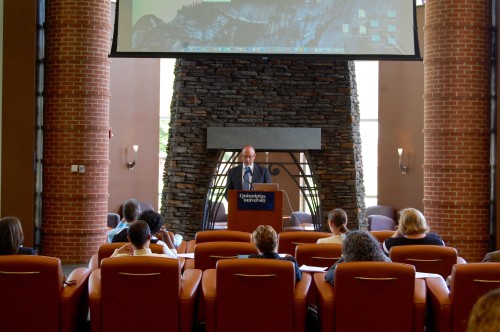 Vice President and Provost Mark Thompson speaks at the teach-in that was held in the Piazza on Thursday, Sept. 29.

Students, faculty and staff crowded the Carl Hansen Student Center Piazza on Sept. 29 for a teach-in on ‘Race in America.’ The event was supported by the Collaborative for Interdisciplinary/Integrative Studies in the College of Arts and Sciences and it was a day long session running from 9:30 a.m to 4 p.m.

Associate Professor of History Sasha Turner said the teach-in was not a part of the ninth annual Diversity and Inclusion week that occurred during Sept. 16-30, but rather it was a part of her project as a faculty fellow for the Collaborative for Interdisciplinary/Integrative Studies in the College of Arts and Sciences.

“My work as a fellow is to collaborate with faculty in other disciplines to create a new minor and to work on a project of my choosing,” she said. “The project that I chose is entitled: Initiative Examining Black Lives Matter. By holding panel presentations, teach-ins and an interdisciplinary course, among other events, the Initiative aims to investigate race, racial violence, civil rights activism and intersecting gender, class, sexual and religious disparities.”

The collaborative invited people from the academic community to speak on the topic of ‘Race in America’ for about ten minutes each. A total of 22 people volunteered to be speakers are the teach-in. The speakers addressed some subjects about Race in America that were more general, such as racial profiling and racial ideologies, but other subjects focused on a more specific ideas like the impact of black psychologists and solidarity amongst African-Americans, Jews and Palestinians.

There were several participants in the audience who spoke to the speakers on their thoughts about race, including freshman undeclared business major Joy Alino.

Alino learned about the teach-in from the Global learning living Community and through her professor in First Year Seminar.

“For my FYS class, we were suggested that we should come here as well and also learn more about ‘Race in America’ and I’m just so very interested about race relations and just basically how we as a society might be able to come closer to finally come to a point where individuals are finally being treated as equals,” she said.

The event turned out to be a success, according to Alino.

“The outcome was really great, I wasn’t expecting too many people to come but honestly today was such a surprise,” she said. “A huge reason as to why we have a lot of problems that we have in our world is that it’s hard for people to actually care about the issues being presented. However, if you give people an incentive to actually show up and participate, they will.”

Turner believes the teach-in had a great attendance and motivated people to take more interest in the Black Lives Matter movement.

“We provided them with a blurb for the context of the teach-in to encourage people to make a connection between their research and teaching and how we might be able to explain why at this moment we are seeing the creation of the BLM movement,” she said. “There were people who stayed for several sessions, and a few people who seemed to have been there for the entire day. It was a wonderful event, lots and lots of students came not just as a class, but as individuals.”

Sophomore Sociology major Shaylah Zorn feels that though this was a good approach to talk about racial matters, these type of topics must be more enforced into classes.

There are also going to be other several events that will talk about racial matters, including a meeting on Race, Law and Criminal Justice on Oct. 18 in the Clarice L. Buckman Theater from 7-9 p.m. and a meeting on Race, Politics, Culture and Society on Nov. 14 also in the Buckman Theater from 7-9 p.m. In addition, there will be panels in February, March and April and collaborations with several units of campus including Socrates Cafe, A Place at the Time and Circle of Perspectives.

Turner also said there are plans to create an interdisciplinary course listed as IDS300, which will be cross-listed with history and sociology.

“We are very excited about the course, which will not be taught by one professor, but by a teaching collective,” she said. “Using multiple media sources students will evaluate how different disciplines approach the topic of race, racial formation and social justice in America.”