Volleyball’s winning streak ends at eight after loss to Niagara 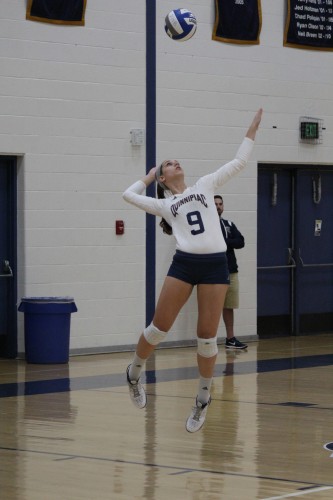 For the first time since Sept. 10, the Quinnipiac women’s volleyball team lost a match as Niagara University won by a score of three sets to two. 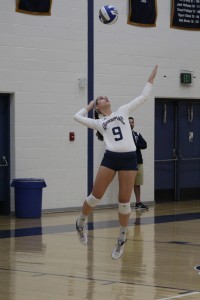 Despite the loss, head coach Kris Czaplinski is staying optimistic.

“It was a tough loss. We’ve got to get back to better preparing this team and the coaching staff from here on out,” Czaplinski said. “Every loss, as long as we learn something from it, we’ll be alright.”

In the second and third sets, the Bobcats say they were not on the same page communication-wise.

“When [Niagara] started to exploit our weaknesses, everyone got quiet,” senior middle hitter Allison Leigh said. “I think that was the most detrimental thing to the game because when things start to go wrong, everyone needs to up the communication.”

Niagara edged out the Bobcats in the second set, 26-24, to give each side one set a piece. In the third set, Quinnipiac found itself down by two points at set point. The Bobcats proceeded to score four unanswered points and won their second set of the match, also by a score of 26-24.

Niagara tied then things up, winning the fourth set 25-21, to force a fifth and final set.

Even though the Bobcats lost, they didn’t lose by more than five points in a single set. Czaplinski says that if there was anything the Bobcats kept showing off during the game, it was their ability to bounce back from multiple point deficits.

“This team, whether it’s adjustments in timeouts, I think their ability to bounce back has been incredible,” Czaplinski said. “They understand what needs to be done.”

Another thing showcased throughout the game was the dynamic duo of Allison Leigh and sophomore outside hitter Jen Coffey. Out of the 107 points the Bobcats scored, Leigh and Coffey were responsible for 42.5 of them.

“I think that Jen is an incredible player,” Leigh said. “She comes in and makes big plays that sparks energy.”

Leigh only started three matches last season before missing the rest of the season due to injury, so this is the first year she and Jen have actually gotten the opportunity to play alongside each other. Coffey is certainly happy about it.

“Having Allison back is awesome because we look so intimidating in the net with [Allison] a girl that’s six-four,” Coffey said. “As soon as I’m blocking with her, I’m very confident. I know the ball is going to go straight down as soon as it hits one of our hands, so blocking with her is fun.”

Quinnipiac’s next game will be at home on Saturday, Oct. 8 against Fairfield University. Fairfield (14-5 overall, 7-0 MAAC) is the only undefeated team left in MAAC play.