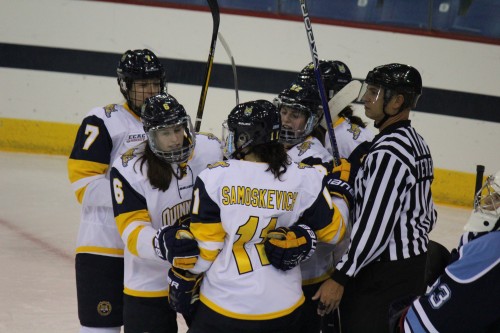 Quinnipiac women’s ice hockey earned its second win on the year as they shutout Maine 3-0 on Saturday at High Point Solutions Arena in Hamden. 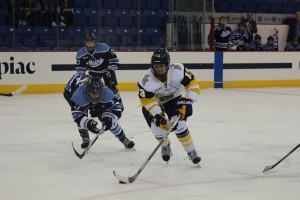 “We knew after a rough third period yesterday, they would come out strong,” Rossman said. “I think it was really important that we stayed confident, stayed on our game and let them know they can’t win in our building.”

Quinnipiac struggled to take advantage of several scoring opportunities early in the first period, including an open-net chip shot from Sophomore forward Melissa Samoskevich. Sophomore defender Kate MacKenzie failed to slap one in front of the blue line after a two-minute hooking penalty. Quinnipiac outshot Maine 13-9, 7-3 shots on target, in the period, but did not find a way to score.

Quinnipiac came out in the second period aggressive and with tenacity as junior forward T.T. Cianfarano netted her third goal of the season off an assist from sophomore forward Kenzie Lancaster with 13 minutes remaining. Senior forward Meghan Turner later scored her first goal of the season as she snuck one by Maine goalie Carly Jackson with eight minutes remaining. Melissa Samoskevich joined the scoring party with less than a minute remaining as the Bobcats headed into the third period with a 3-0 lead.

“Our team was in the right mindset as they approached the game today and they really seemed to form their identity of how we play Quinnipiac hockey,” head coach Cassandra Turner said.

The Bobcat’s dominated the puck throughout the entire third period while Rossman held Maine scoreless. Turner was impressed by Rossman, who finished the game with 17 saves.

“Mentally, she has something really special as a goaltender and to move onto the next shot, evaluate and not dwell showed today,” Turner said.

The Bobcats (2-0) will travel to Storrs, Connecticut and put their perfect record on the line when they face the University of Connecticut (2-0) Friday at 7 p.m.